Video of this song from youtube
Average Rating : 4.40
Total Vote(s) : 72
Please rate this song between 1 star and 5 stars (5 stars being the best). Just move your mouse on the stars above and click as per your rating. Your rating will really help us to improve our website. 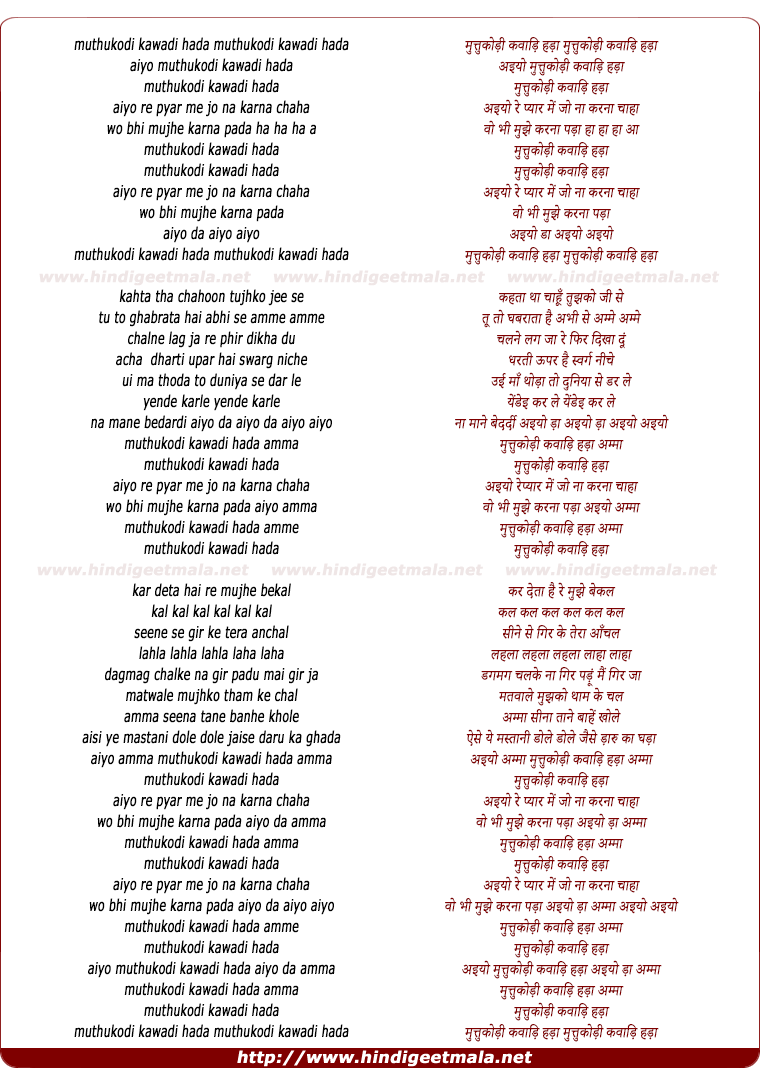 Comments on song "Muttukodi Kavaadihadaa,"
yaanai on Sunday, May 25, 2008
Tuti is famous for Pearl diving "Muthu kuliyal" in Tamil = bathing for
Pearls. It is truly amazing. These guys(well, 100% are male, I believe) do
scuba diving without oxygen cylinders, stay down there for quite a while
and emerge with the oysters which might contain a Kohinoor of Pearls!
Tuticorin has now other famous landmarks: the Koodankulam nuclear plant is
close by and if the Ram Sethu controversy is resolved and the Sethusamudram
canal built, Tuticorin port will get real, real busy!

fugitive143 on Tuesday, May 05, 2009
"Muthu Kulika Vaarigala, Moochai Adaka Vaaarigala". Muthu means "pearl." The act of going into the sea and the getting the pearl back (which is a heroic act) in tamil is called "muthu kulika," vaarigala means "r u coming" so the girl is actually asking the man if he has the ability to hold his breath for so long to go inside the sea and get the pearl. And Ayyo da is used in Tamil and Malayalam...in Tamil it means Oh no!
Rmehtacpa on Friday, May 14, 2010
If McChirkeen is a man, come in front of any self-respected INDIAN and he
will see if he can escape the result of his COMMENT on INDIANS. He should
not forget that NOT all Indians are like the present PM Mamohan Singh and
his gang who will Salute the foreign power and enslave themselves

MsScorpyscorp on Wednesday, May 22, 2013
Hats off to RD Burman and his brainwave to combine Mehmood Saab and Ashaji
for this song. An oddball combo but what an effect!!!!!!!!!!!. This song
evokes many childhood memories. I used to listen to it on vividh bharati.
Thank you Panchamda, for being the maverick, that you are.

0point00 on Saturday, May 19, 2012
Yes, I heard the Tamil Folk song on which this is based. Very nice song and the two sound very similar except a bit in antara. I personally feel that the Hindi version sounds better, but that one was also good. Probably Mehmood's import.
View all 123 comments related to song Muttukodi Kavaadihadaa,