Video of this song from youtube
Average Rating : 4.25
Total Vote(s) : 16
Please rate this song between 1 star and 5 stars (5 stars being the best). Just move your mouse on the stars above and click as per your rating. Your rating will really help us to improve our website. 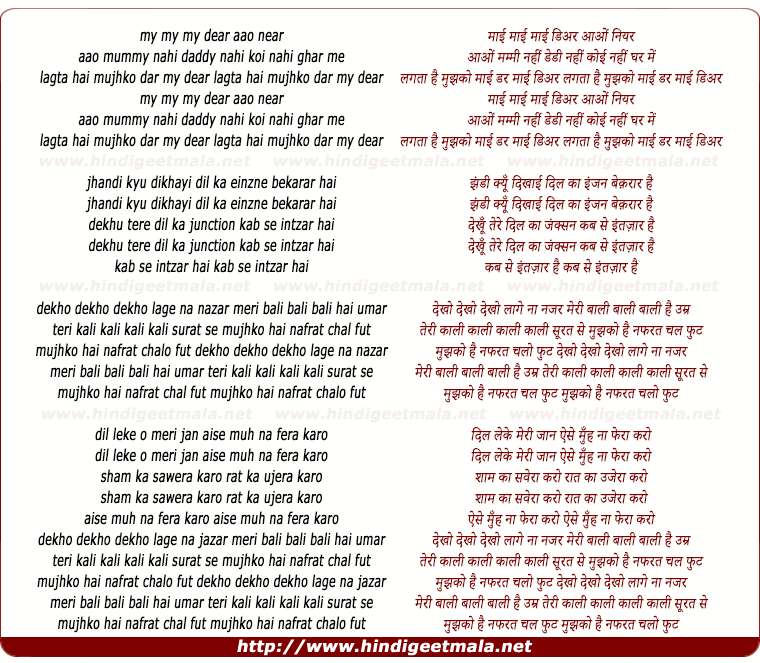 Comments on song "My My My Dear, Aao Near"
aryankhan65 on Saturday, July 03, 2010
@tiktam51...okay no problem dear...sure i can mail you the audios...so for that you'll have to send me your email id...so send me your email id so that i can mail you the audios..okay?
MoleculaRafian on Friday, July 02, 2010
Excellent upload. Rafi , so fresh and young. Only thing, I don't think,
Shamshad'd voice suits this pretty actress. Thanks for sharing, my friend.
Make it a great day, MR

Srinivasan Channiga on Tuesday, June 04, 2013
Nice rock-n-roll type song composed by Shankar-Jaikishen in 1951 itself.
Looks like N.Dutta also copied it in Mr X (1957).

shankerjai on Thursday, July 01, 2010
SJ are known for using Lata more than Asha then other female singers.I
myself being SJ fan was concerned as to why SJ did not use Shamshad Begum
in their songs.there was one known to me earlier Qawwali from
Arzoo...but now I am satisfied...and what an use of her voice here in this
song. Thanks for uploading this song


View all 10 comments related to song My My My Dear, Aao Near