Video of this song from youtube
Average Rating : 4.65
Total Vote(s) : 43
Please rate this song between 1 star and 5 stars (5 stars being the best). Just move your mouse on the stars above and click as per your rating. Your rating will really help us to improve our website. 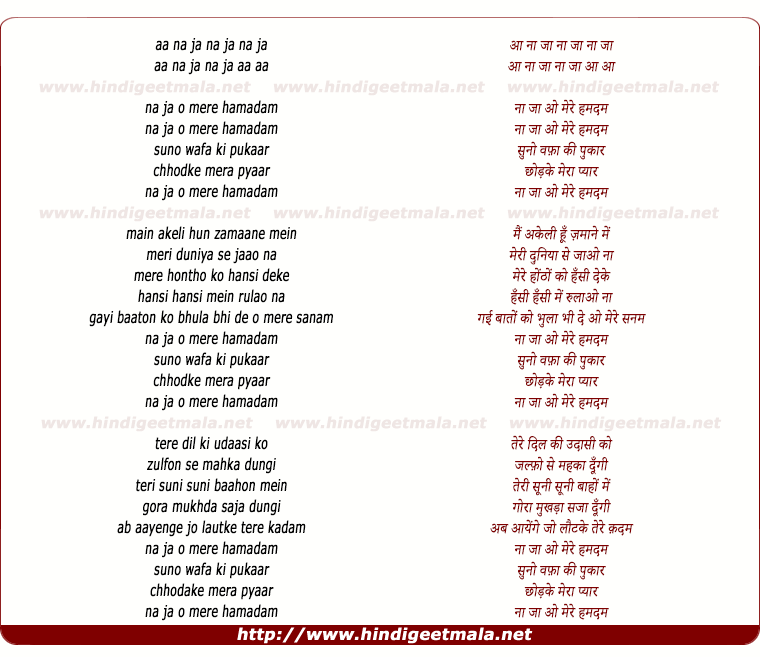 Rahul Mukherjee on Wednesday, December 25, 2013
In my imagination filmization of this great creation should be done in
different way. The dress of heroine should be totally white in colour like
Christians. The heroine should be extremely beautiful. The time of the
scene should be night time.The hero and heroine should be in one room
rather than outside till the last moment of the song when hero will not
listen to the heroine and finally goes out of the house and start walking
towards a church. If we notice we can listen the noises of church bell
throughout the song. At last heroine will only watch and see the hero
vanish slowly from the scene.﻿

manjukesh tripathy on Monday, March 23, 2015
I hadn't actually watched the video before. I thought it was a horror film
song like Naina Barse or Lag Jaa Gale...But even after watching the video,
I have no complaints. I heard this song for the first time today and I have
listened to it 18 times without break.There are many ways a particular
thing can be perfect. The Immortals Lataji, Pancham Da and their magic.
Good thought Rahul Mukherjee though...I think it would have looked better
at the end if Aasha Parekh had burst into tears profusely than biting her
lower lips. ﻿

TheWaiting22 on Monday, December 14, 2009
indian films has also a great market in east africa like
somalia,kenya,tanzania zanzibaar,uganda iam sure people in this region
watch more indian films other than western movies.