Video of this song from youtube
Average Rating : 3.68
Total Vote(s) : 356
Please rate this song between 1 star and 5 stars (5 stars being the best). Just move your mouse on the stars above and click as per your rating. Your rating will really help us to improve our website. 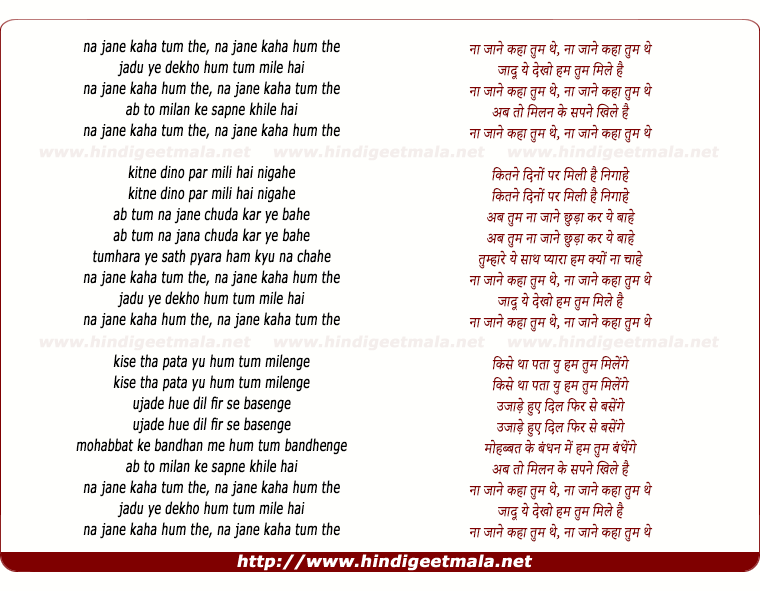 Comments on song "Na Jane Kaha Tum The Na Jane Kaha Hum Hai"
nandu1f on Saturday, June 13, 2015
Wow. Long forgotten song in long forgotten setting. Couldn't quite make
out where filmed. Glad they didn't make handsome Rajendra Kumar dance
here; he was stiff - still un-suitabley tried to copy arms-waving Shammi K
or Dev, who even with their over-acting could carry it well to make their
girl fans happy. True, Shammi was us boys favorite also. [Whew, I dunno
how or what I did right to be able to "comment" today on a couple of songs
on YT, after a long long time. It worked on the phone, so apprehensively I
tried it on the computer; and it worked. But I don't know what is this
"public" flag below the comment box.] Anyway, thanks Suhanee ji for this
flighty tune from the carefree part of our life.﻿

passion689 on Tuesday, January 05, 2010
I am glad you once again uploaded this song which I feared in case it had gone for ever with your previous existance!! This is undoubtedly one of the most melodious songs from MD & LM which attracted my attention . The other magic duets from this duo were from film chori chori . Thx again for your impressive uploads in general and this one in particular. Take care.
Jagjit Singh Ishar on Tuesday, March 15, 2011
used 2 hear the song frm AIR & SLBC in my childhood being my most favorit.
xlnt composition & my salutes 2 mannadey & suman 4 their honey sweet divine
voices. another feather in the cap of datta ram 4 having composed so well
sweet melodious song. suhanee thanx 4 the xlnt upload on ur xlnt channel.

Naveen Dighe on Friday, March 25, 2011
ONE MORE GEM FROM THE GREAT DATTARAMJI SHAILENDRA JI MANNADA SUMANJI
COMBINE DATTARAMJI WAS NOT AN ASISTANT MUSIC DIRECTOR OF THE LEGENDARY
SHANKER JAIKISHAN BUT AN ASSOCIATE MUSIC DIRECTOR WHO WAS RESPONSIBLE FOR
THE MAJOR CREATIVE INPUTS

raj dalwani on Thursday, October 25, 2012
Suman and Mannadey, what a rare and the most beautiful combination. It is a
hit song. I love to listen to this sosng again and again. Rajinder Kumar
has always been my favourite. And of course Meena je is terrific.