Video of this song from youtube
Average Rating : 4.44
Total Vote(s) : 1115
Please rate this song between 1 star and 5 stars (5 stars being the best). Just move your mouse on the stars above and click as per your rating. Your rating will really help us to improve our website. 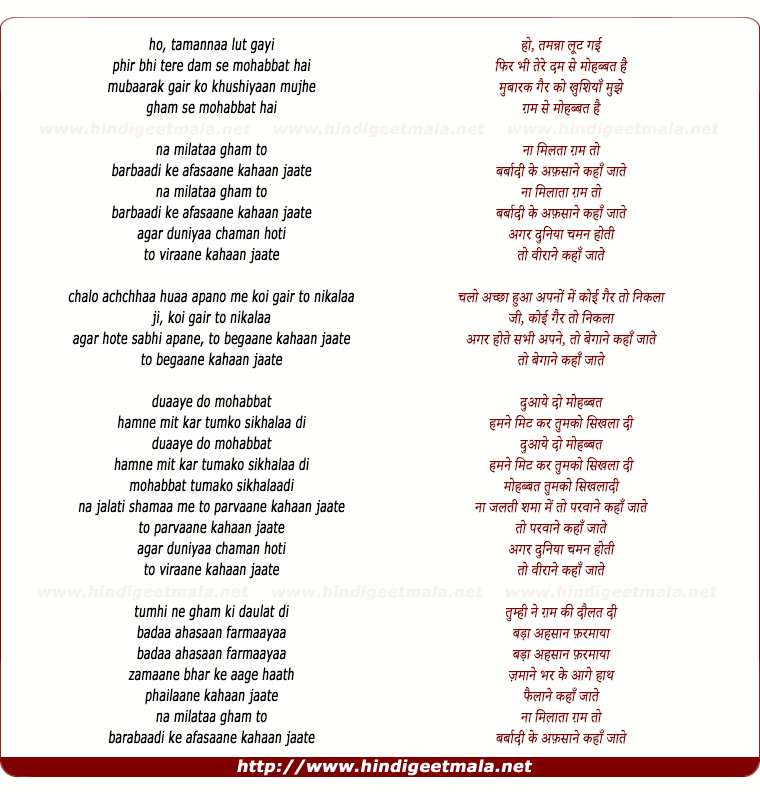 Comments on song "Na Milta Gam To Barbadi Ke Afsaane Kaha Jate"
V. Siddhartha on Thursday, June 04, 2009
"Mubarak ghair ko khushiyan, mujhe gham se muhabbat hai... na milta gham to
barbadi ke afsane kahan jate... agar duniyan chaman hoti to virane kahan
jate." This sad song is not just a lament on a cruel fate ; it's Sufi
poetry at its most profound. Lataji's voice and Nimmi's acting both seem to
come from deep within their hearts. Can they leave any listener unmoved to
tears? A splendid post from a great film filled with moving lyrics and
soul-stirring melodies. Thanks, Suhanee.

The lyrics of the songs are unforgetable . The song is soul searching and
heart rendering voice catches your attention. Never to forget songs.Gone
are the lyricists and musics directors who created this real world of human
emotions. ﻿

V. Siddhartha on Thursday, June 04, 2009
..Another heartrending line in this exquisite Shakeel Badayuni poem is:
Chalo achha hua apno mein koyi ghair to nikla , agar hote sabhi apne to
begane kahan jate.Such acceptance of human vulnerability, such resignation
to fate, accompanied by forgiveness extended to one's own tormentors, only
comes from a deep grasp of how all dualities, all good and bad, are
inextricably intertwined in our lives.

V. Siddhartha on Sunday, September 13, 2009
Notice the extraordinary range of emotions that Nimmi beautifully expressed
in three songs, the deeply touching feelings of suffering, injustice,
abandonment and grief in this song and Khamosh Hai Khewat and joy in Ek
Baat Kahoon. Of course, Lata and Asha were there to help her out on the
musical level. Thanks for all the Amar posts, Ramchandraji.

rumahale on Sunday, September 13, 2009
Thanks for the rich comments. The emotions have great impact. I have not
seen the movie, but now referred to the details regarding its plot; and,
was moved very much. All in all the movie is superb thanks to all those who
contributed for its success including Mehboob Khan - Producer. Regards.