Video of this song from youtube
Average Rating : 4.78
Total Vote(s) : 9
Please rate this song between 1 star and 5 stars (5 stars being the best). Just move your mouse on the stars above and click as per your rating. Your rating will really help us to improve our website. 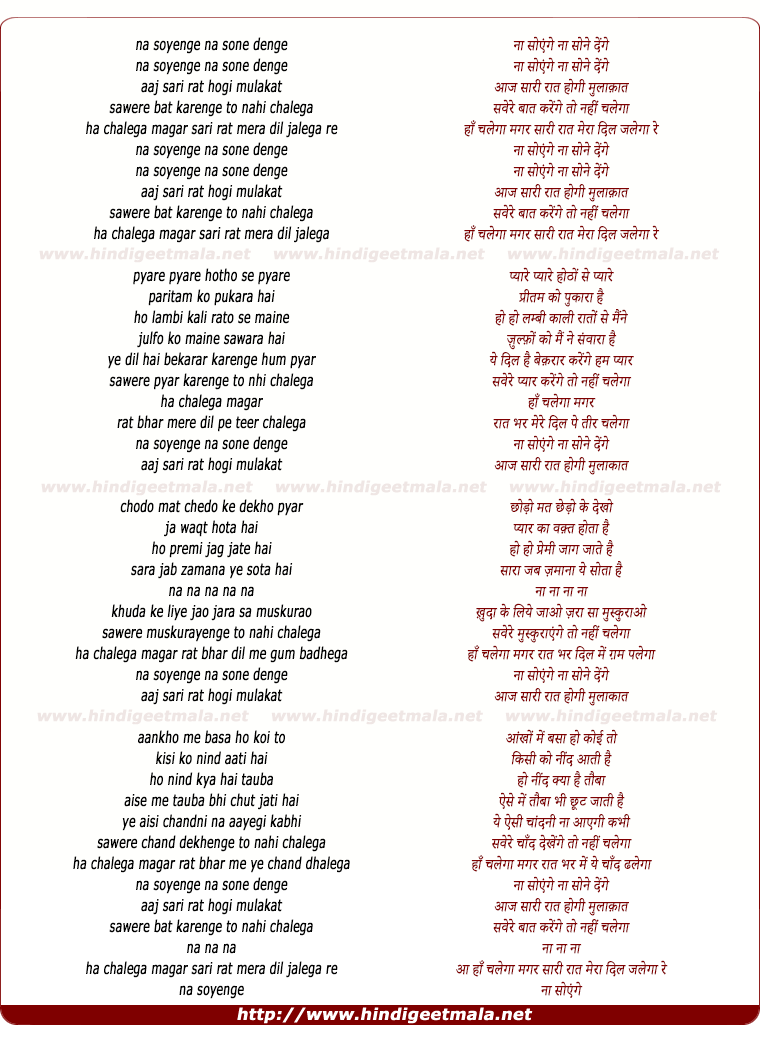 Comments on song "Na Soyenge Na Sone Denge Aaj Sari Raat Hogi Mulakaat"
ShobhanDuttaRay on Friday, May 06, 2011
Amazing song!!! only recently ... about six months ago I discovered this
song inspite of growing up listening to RD Burman, Kishore Kumar!!! It
amazes me as to why HMV (I am sure they have the right to this songs as
most of the old collection of songs are with them) never released this song
in any of the the cassettes / CD of Kishore, Lata or RDB. Feel cheated.
Thanks for uploading this song

Dr Sridhar Saxena on Tuesday, December 06, 2011
All observations on beauty are comparative statements.she (Rinku
Jaiswal) was not liked by viewers thats why she was one film wonder
only...anyways SONG IS AWESOME NO DOUBT...R D BURMAN DA KI JAI HO...even 25
A R Rehmans can not make one R D BURMAN

teringkit on Thursday, June 04, 2009
shashiji looking so cute in the beginning of the song. he was one of
yesteryear's best actor with dashing gud looks

MsScorpyscorp on Friday, May 17, 2013
Based on the no. of times Rinku Jaiswal winked at Shashi kapoor, she shud
be given the moniker, "WINKU JAISWAL".

sanjayd411 on Saturday, December 05, 2009
Ohh what a song! Waah...Classic RD Burman stuff. It has been many many
years since I heard this song.