Video of this song from youtube
Average Rating : 4.41
Total Vote(s) : 832
Please rate this song between 1 star and 5 stars (5 stars being the best). Just move your mouse on the stars above and click as per your rating. Your rating will really help us to improve our website. 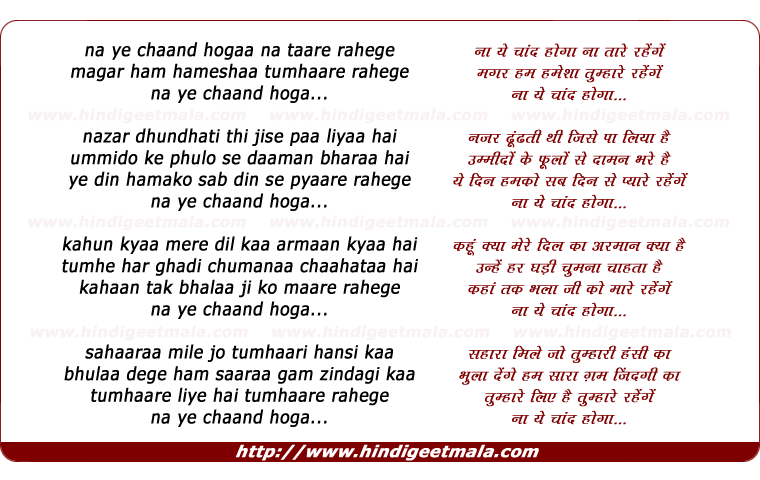 Comments on song "Na Ye Chand Hoga Na Tare Rahenge (By Geeta Dutt)"
Narsingh Agnish on Friday, May 22, 2009
This was Hemant Kumar's second Hindi film (Anand Math being the first one)
and the third one ... Nagin. Wow, what a start! This movie had 12 songs,
all gems. The CD has been out a long time. It is good to finally see the
video. Thanks.

Girish Gupta on Tuesday, September 25, 2012
You are right about Anand Math ( who can forget the Vande Matram of Anand
Math).But I believe Jagriti was his second Hindi film, Shart third and
Nagin was fourth. All songs of these films were hits. GCG

yuanyuanyuanyin on Thursday, August 19, 2010
- I can imagine how our Subcontinent friend's liking of this particular song. You have done an "unusual thing" by making THREE comments!
Thank you my dear friend, Dr Arjun.

nisha Patel on Sunday, November 06, 2011
hi,
ohhhhh u made me rember my old gollege days... tx
beautiful classic song, i used to listen all the time on the radio in those days.
thanks for sharing
all the best
rjnisha
[london]