Average Rating : 4.67
Total Vote(s) : 18
Please rate this song between 1 star and 5 stars (5 stars being the best). Just move your mouse on the stars above and click as per your rating. Your rating will really help us to improve our website. 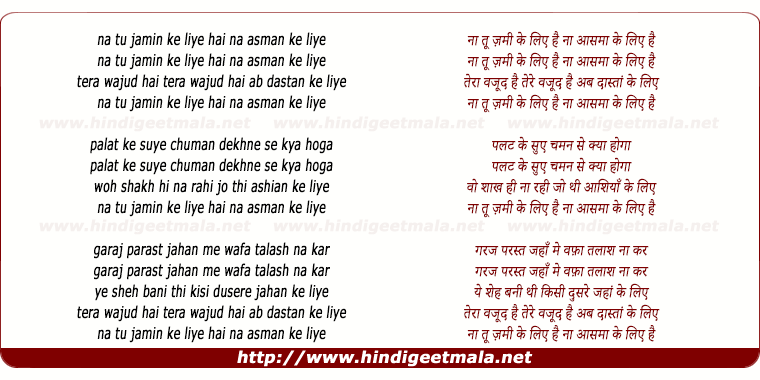 Comments on song "Na Too Jamin Key Liye"
Mohammed Raffi on Tuesday, June 08, 2010
Matchless absolutely no one can dare to touch those scale simply the music
follows his voice.undoubtedly Rafi Saheb was really either the
other side of the spectrum and ranges beyond compariasion truly octave
singing about the saath sur...truely divine voice...feels if the heavens
too are listening when singing...R.I.P Haji Rafi Saheb.My
tributes...Mohammed Raffi

Today's flop Actors should learn something from him

MyKaempfer on Wednesday, March 07, 2012
@moula53--- Please correct the information provided. The music director is
not Ravi; but Laxmikant Pyarelal.