Video of this song from youtube
Average Rating : 4.18
Total Vote(s) : 143
Please rate this song between 1 star and 5 stars (5 stars being the best). Just move your mouse on the stars above and click as per your rating. Your rating will really help us to improve our website. 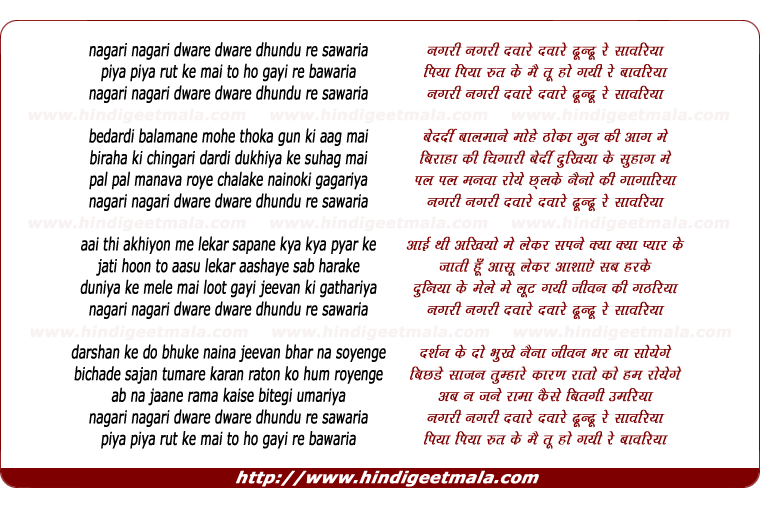 Comments on song "Nagri Nagri Dwaare Dwaare Dhundhu Re Sanwariya"
Zil Hasnain Kazmi on Thursday, December 30, 2010
One of the classic movies of the fifties. I love this film. Lata Mangeshkar
and Late Naushad Sahib produced some awesome memories which are evergreen.
Who can forget the accidental love between Nargis and Sunil Dutt. That
forced them to get married. Her role in this film was marvelous. I would
consider Mother India her best movie. I am sure that the future generations
would remember Nargis because of her immortal role. God bless the entire
unit of this film.(30th December 2010)

philipposathina on Friday, December 23, 2011
In the -60's, started with MOTHER INDIA, indian movies became very popular
in Greece. The song "duniya main hum aaye" was adapted, with greek lyrics,
and is still considered to be an all time classic in my country. I was too
young and could'nt understand much, but i clearly remember how much i was
impressed by the colours, the backset, the acting and singing and acting in
these films. Like a fairytale, though scary sometimes...

jajakumar on Sunday, August 22, 2010
Dear Yuan, thank you for uploading this. I saw this film when I was a young boy and it seeing it again after 50 years evokes a lot of memories and emotions. What a wonderful film that a mother's instinct to struggle for her children is beautifully reflected. Regretfully we do not see such memorable films these days.

Thank you for your effort in bringing such memories and emotions to all of us.

Lal Gar on Sunday, May 01, 2011
@shawneechief - lucky you. I too saw this movie in a Greek cinema on Park
Ave in Montreal, but I don't really understand Hindi and definitely do not
read Greek, but I still enjoyed the movie. @jajakumar - excellent movie and
mothers still have that instinct to struggle for their children and they
always will, even if they don't put it in the movies anymore. It is just
instinctive.

yuanyuanyuanyin on Monday, April 26, 2010
- This is one of the films that should be watched by all the sub continent people, regardless of nationality and the age, according to my sincere opinion.
Especially the younger generation, just to get the glimpse of the hard life [among many other things] our forefathers have under gone not so long ago!
Thank you, my friend.