Video of this song from youtube
Average Rating : 4.03
Total Vote(s) : 86
Please rate this song between 1 star and 5 stars (5 stars being the best). Just move your mouse on the stars above and click as per your rating. Your rating will really help us to improve our website. 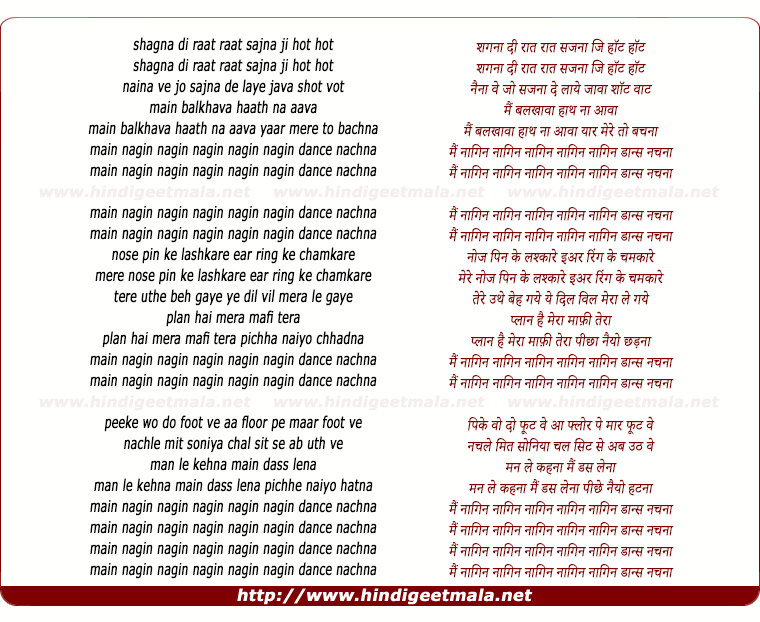 Comments on song "Nagin Dance Nachana"
Sahil Ahuja on Wednesday, July 24, 2013
Do you know why she sounds alot like her dad ?? because they both use
Softwares to tweak their music Search "Auto Tune" on google... so bad
singers just good tunes.. Real singers are Shreya Ghoshal , Sonu Nigam
etc... poor businessman Anu Malik..

sundarzindagi on Thursday, October 09, 2014
Is this the equivalent of move your body like a snake? The singer is
annoying. And the girl in the front looks like a broke Madhuri. Yet its a
catchy song and find myself singing along. ﻿

punk jack on Tuesday, July 23, 2013
song is catchy and dance too... but the epic part is ''mata ni tera baap
bol rhihu'' lolzzz she is so fine actress.

Cerly Mess on Monday, July 22, 2013
Dude.. on of them is english and the blackhaired one is persian xD google
it... and stop being so rude..

Eleyrian on Tuesday, July 16, 2013
In this entire video, the actual "naagin dance" was performed for a grand
total of two seconds.