Video of this song from youtube
Average Rating : 3.42
Total Vote(s) : 12
Please rate this song between 1 star and 5 stars (5 stars being the best). Just move your mouse on the stars above and click as per your rating. Your rating will really help us to improve our website. 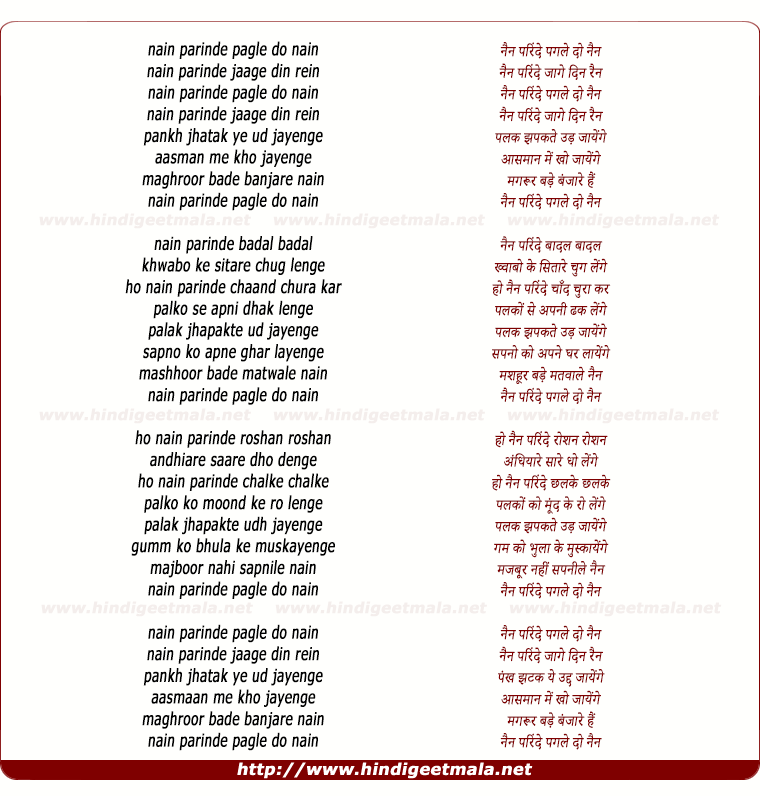 Comments on song "Nain Parindey Pagle Do Nain"
rhearoks on Tuesday, August 17, 2010
@boogeymanfromhell I think she is totally broken up emotionally for some
reason which is causing her disability in judging the surrounding!She has
acted brilliantly in this song I liked her performance in Love Aaj Kal too
but her she is looking more matured as an actress & emoting her expressions
through her eyes wonderfully.Its a delight to watch Neil's protective act
too he is also looking superb as per presenting emotions & THE SONG IS
MAGICAL

2kool1 on Friday, August 13, 2010
@boogeymanfromhell ...I think it has more to do with loss of self
confidence...see for her..seeing is "believing".she "sees" because she
believes...in this scene, she has no confidence and no belief left in
her.so her handicap seems 10 times magnified...such people if they
experience a loss of belief find it difficult to survive...good
expressions...she looks down and out in this one...

renetta persaud on Friday, August 13, 2010
@boogeymanfromhell i think it's more of the fact that its an emotional
scene. if that’s true...i think they're just trying to show that because
she's so overwhelmed with whatever she's feeling, she's not focused on her
surrounding as much... so she "can't see"...but i'm just guessing

xanimtoefl on Monday, November 12, 2012
she said " apna khata khatm one shot" i dont know hindi, what does it mean?
preetsulya16 on Friday, August 20, 2010
Deepika is really very good in the movie, specially in this song.
View all 13 comments related to song Nain Parindey Pagle Do Nain
Popular Links on HindiGeetMala