Video of this song from youtube
Average Rating : 4.40
Total Vote(s) : 45
Please rate this song between 1 star and 5 stars (5 stars being the best). Just move your mouse on the stars above and click as per your rating. Your rating will really help us to improve our website. 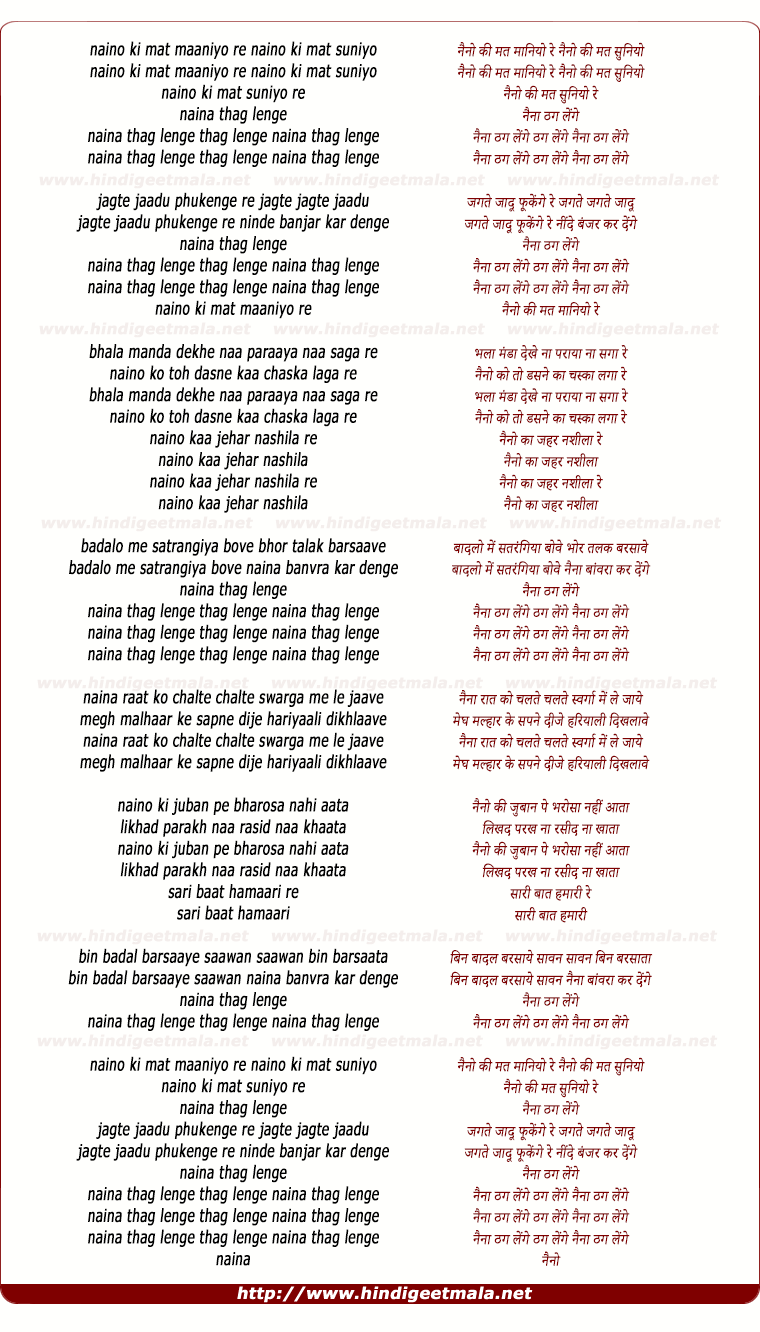 Comments on song "Naina Thag Lenge, Naino Ki Mat Maaniyo Re"
Rajagopal K S on Monday, March 25, 2013
beautifully translated, congrats! gone are those days when the pair used to sing romantic numbers. These days the songs are based on actual circumstances and mostly Sufi type without the hero or heroine having to sync their lips for it. Rahat has brought in a revolution in rendering songs despite being a qawali singer! I am also inspired with his renditions and sang a few karoake songs. can be accessed under kayesare in you tube. pl listen whenever you get time and let me know?
piyush7919 on Sunday, August 01, 2010
yeah it seems Da vinchi code was original idea not derived from indian
mythology and so do Avatara was never derived from some concepts having
root to some religion and it seems the emotion,casting,lyrics etc that
suits the Indian audiences and which neighbouring country audiences "die"
to watch leaving the copy cat what u say...is it "lollywood"??? been
derived from something..we dont have anything
original...hahahahahhahahah..have fun..we know what we r...

piyush7919 on Wednesday, July 07, 2010
Dont comply to eyes dont listen to eyes... eyes will betray you.they
steal from you and betray you... while you are awake..they will throw magic
on you... when you will sleep they will make your dreams infertile ... eyes
dont see good,bad,your,mine..they just sting like snake... and so do their
poison is intoxicating. in the sky...they will seed dreams of the seven
colours... you will be in their mystry till dawn.they will make you
crazy...

The 12th Man on Friday, July 06, 2012
Composers can not do anything with their tune until unless they have a
singer to match their needs . its very simple , whatever the tune is , if
Annie princess is singing this song , she would totally destroy it.Mel
Gibson took this guy for his movie Apacalypto's theme song.Hollywood is
full of composers then why they preferred him over 100 countries to choose
singers from.He is not an ordinary singer to relay on composers.It is as
simple as that.

piyush7919 on Wednesday, July 07, 2010
eyes walk through night...take you to heaven... they will seed dream of
monsoon. will show dream of greenery and prosperity... I cant trust the
commitment of eyes... they dont give any voucher..no written evidence...
they will show you rain without clouds... and will show you clouds without
rain. all talks of eyes are to make you fool. eyes do betray you make
you crazy.