Video of this song from youtube
Average Rating : 4.39
Total Vote(s) : 311
Please rate this song between 1 star and 5 stars (5 stars being the best). Just move your mouse on the stars above and click as per your rating. Your rating will really help us to improve our website. 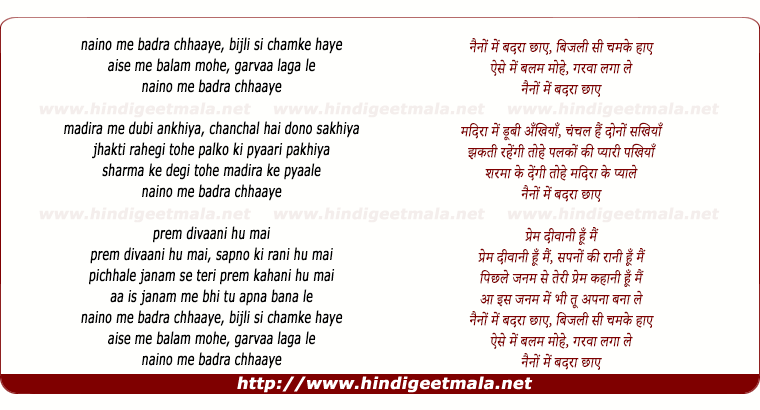 Comments on song "Nainon Mein Badra Chhaye"
Psyche1954 on Saturday, April 23, 2011
@linkaholic
This is NOT MUSIC WRITTEN! This is the classical Raag Bhimpalasi, an afternoon early evening raaga and is a a very popular favourite melody of MANY performers!The most illustrious is Kishori Amonkarji who sang live in QEH at London and is available in Drut(rapid) form on You Tube elsewhere! the bandish goes " Rang so Rang Mila, Mayiee"! I was fortunate enough to attend that concert!

nawabshaukat on Sunday, May 31, 2009
MADAN MAAHAAAN he was realy a mahan composer for eg this song iz composed in raag BHEEM PILASEE i have not seen more beautiful composition in this raag than this song lata once said that during recording of this song one the musician was not playing up to the mark he hit his fist in anger to one of the window glass and became injured and said SUR KA SATH MAZAK NA KARO 03332604292
sonny19xx on Monday, May 12, 2008
Thanks prodipdas. What a song ! Madan- lata combo . Though the "mera saya" title song is more popular with the masses but this one is not to be underestimated and this is my personal fav. This is raag Bhimpalas ? whatever the power of Indian classical music is in full glow.
nawabshaukat on Sunday, May 01, 2011
I have not listen better composition composed in raag BHEEM PLASEE than this one which iz composed none other than MADAN MAHAAN He was EXXTRAA than hiz comtemporaries he was GOD of composerz courtesy LATA JI salam hay inn logoon ko 03332604292
sonny19xx on Wednesday, January 27, 2010
I just checked and it is partly true.Well, the anupallavi is the same,but the beginning is similar and not dicto. You are correct. The music in between , is not same and that makes a lot of difference. Anyways, whatever copy is a copy.
View all 152 comments related to song Nainon Mein Badra Chhaye
Popular Links on HindiGeetMala