Video of this song from youtube
Average Rating : 4.15
Total Vote(s) : 26
Please rate this song between 1 star and 5 stars (5 stars being the best). Just move your mouse on the stars above and click as per your rating. Your rating will really help us to improve our website. 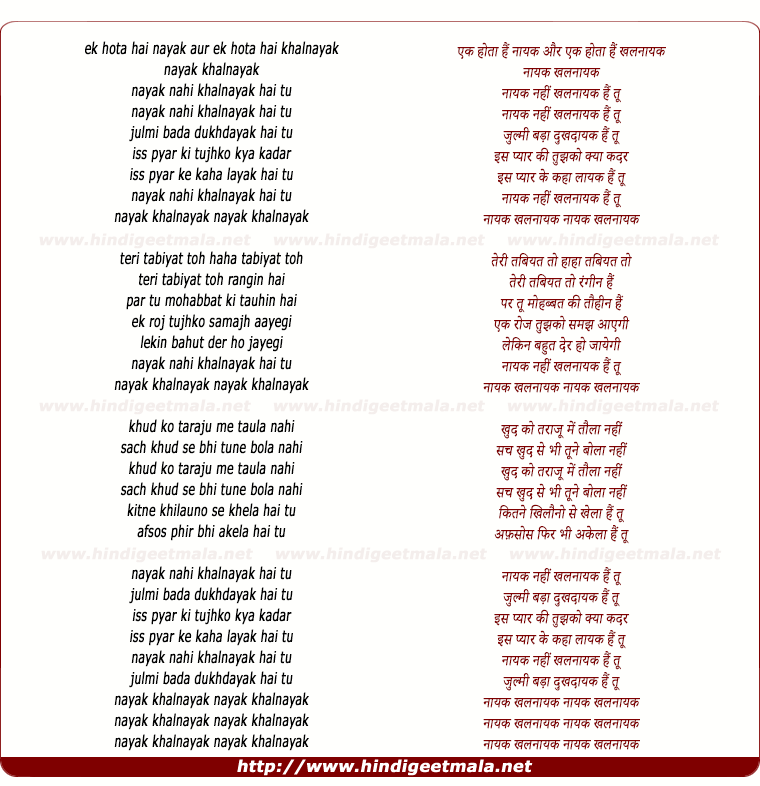 Comments on song "Nayak Nahi Khalnayak Hai Tu"
Sudesh Nirwan on Monday, October 25, 2010
this classic piece of indian film industry is work of great story teller
fondly called the showman Subhash Ghai. Of late he has not been able to
give successful movies perhaps the time has changed bit, but one of the
greatest story tellers of indian film industry. he had the great sense of
music and used laxmikant pyarelal for long 18 years continuously with anand
bakshiji. the masters of their art. This trio lp-ab-sg gave us so many
memorable songs including this movie.

mrssonikuri on Thursday, January 07, 2010
if u want me to translate it it goes like this. im not a hero im a villian
lol i dont no what love is how would i no no1 given me love.erm ... trying
to remember it coz the vdu aint wrkin nemore lol. he basically saying that
he turnd into a villan coz of the way society treating him, that he thou
his mum would suport him but she gon against me an she wid the odaz now an
basically he dissin the world lmao if u want me to translate it line by
line then

moviefreak7007 on Tuesday, January 19, 2010
u r villain not hero, u did not care abt love, u r heartless and
irritating, u dont deserve this love I m villain not hero, I m heartless
and irritating, I don't know what is love, I only deserve hatred from
others..I m villain... Basically, he long for love for his entire life,
but did not get it, cannot than express himself...and the way society
treat him than he become villain.