Video of this song from youtube
Average Rating : 4.41
Total Vote(s) : 54
Please rate this song between 1 star and 5 stars (5 stars being the best). Just move your mouse on the stars above and click as per your rating. Your rating will really help us to improve our website. 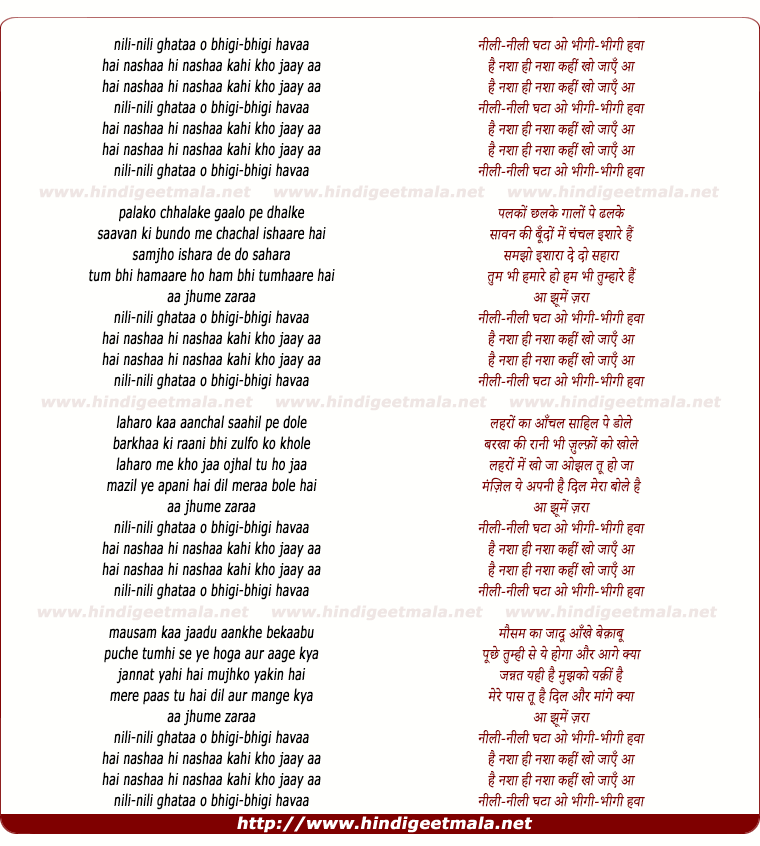 Comments on song "Nili Nili Ghata O Bhigi Bhigi Hava"
M. Saleem Raikodi Raikodi on Thursday, April 17, 2014
Aasha Thai. You are just amazing. Simply not understood just for what the
elder sister stole the limelight. You and Rafi are the Alpha and Omega of
what songsters ought to be. One of the best composition by Usha Khanna.
Usha was good a fizzy compositions aka OP﻿

prakash kalbande on Monday, January 14, 2013
THANKS SIR FOR UPLOADING THIS BEAUTYFUL SONG ON HELEN AND POSTERBOY JOY
MUKHARJI.CANT BELIEVE.BEST COMPOSITION AND FULL JUSTICE GIVEN BY AASHAJI
AND THE GREAT MUKESHSAAB.

Rmehtacpa on Sunday, September 12, 2010
Unfortunately pretty Helen had pickedup a bit of extra weight by the time
she got heroine role here.

Aamir Ashraf on Wednesday, July 01, 2009
one of few good compositions by USHA KHANNA...i think it was her first
movie and she was 17 years old at that time