Average Rating : 4.20
Total Vote(s) : 35
Please rate this song between 1 star and 5 stars (5 stars being the best). Just move your mouse on the stars above and click as per your rating. Your rating will really help us to improve our website. 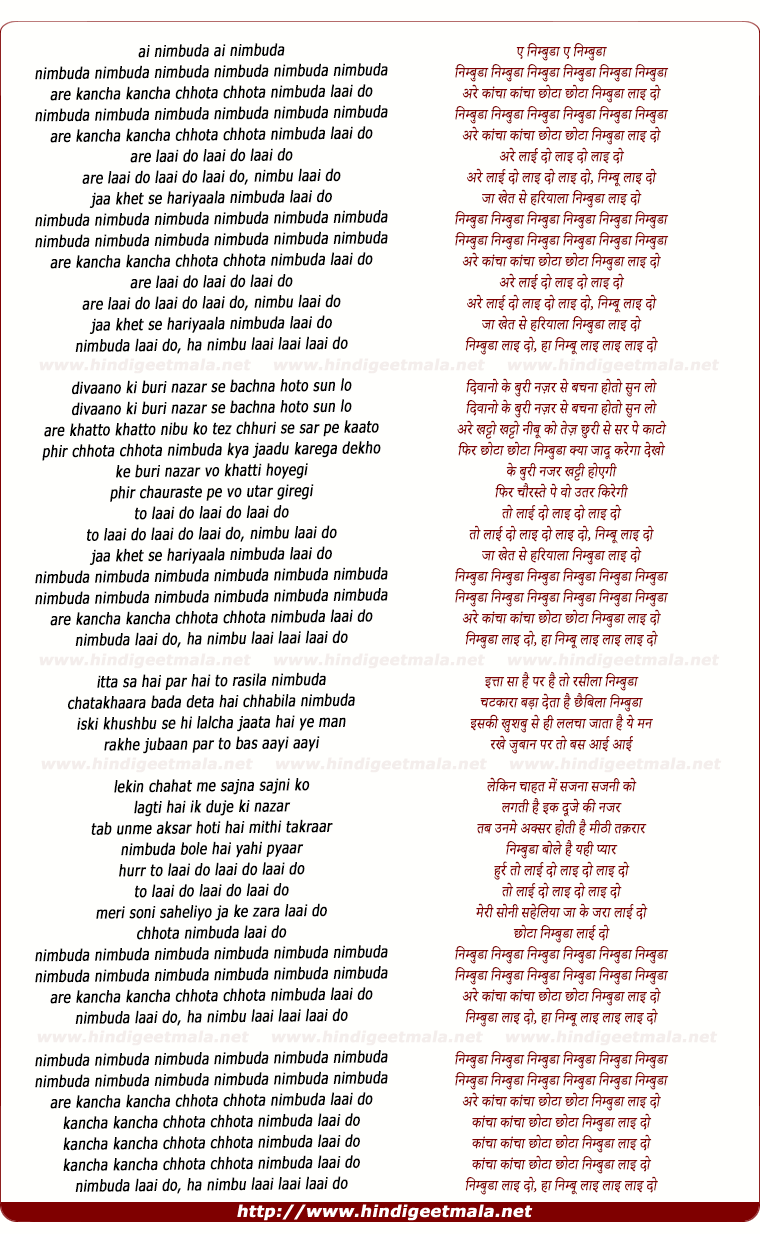 Comments on song "Nimbudaa Nimbudaa"
Desi Parker on Sunday, April 12, 2015
(I'll do this as dramatically as is possible...)
LEMONS! Oh, bring me ripe, ripe, small, small lemons! Oh, bring me lemons
from the fields! If you want to save yourselves from the "evil eye" of
crazy lovers, then LISTEN!
Cut the sour lemon, SHARPLY! Then look at what magic it creates, that the
evil eye becomes sour and goes and lands on a cross road! (It goes and
"finishes itself" off) ~
(The women that tease her) It's only so small, but still so juicy! I tasted
it and it was tingly! (I guess, sour as hell...)
It's fragrance makes your heart greedy, just put it on your tongue and
that's it!~
But when there is love between a boy and girl, they get the evil eye from
one another (not in a bad way) and then there's a sweet fight (lovers'
tiff).
The lemon says, "This is true love." My sweet (girl) friends please, go and
get the lemons, SMALL LEMONS!
(Then just a series of the word, "LEMONS")﻿

heomak on Wednesday, December 22, 2010
@euphoria156 like i said before, no one ethnicity dominates when it comes to beauty over another.are you indian? just wondering cuz if you are, it's sad that you don't think much of your own country people's beauty. majoiry of idnians are brown skinned and i love that rich color. just cuz one person is lighter doesn't make them automatically beautiful. you know iranian women get a lot of nose surgeries, right? it's a known fact. anyway.yea..my bad.lara is punjabi mixed with anglo-indian
Fifi03 on Friday, October 16, 2015
This movie captured my heart especially when i saw aishwarya's beautiful
face.. And the next movie that she look extremely gorgeous was in devdas..
I think she also look amazing in umrao jaan.. Only that the storyline was a
bit too boring..﻿

heomak on Friday, December 17, 2010
@euphoria156 i know aish is indian but a lot of people can agree that not many indians girls look like aishwarya.
aishwarya is a special type of beauty-very rare and exotic according to indian standards. no wonder indians love her so much.

Kiran Sharma on Monday, November 16, 2015
This dance of hers proves her versatility from her expressions, emotions,
bends, kneels and turns.


Unfortunately for her, social media and Bollywood became huge 10 years
later otherwise she would have had massive fan following.﻿