Average Rating : 3.56
Total Vote(s) : 9
Please rate this song between 1 star and 5 stars (5 stars being the best). Just move your mouse on the stars above and click as per your rating. Your rating will really help us to improve our website. 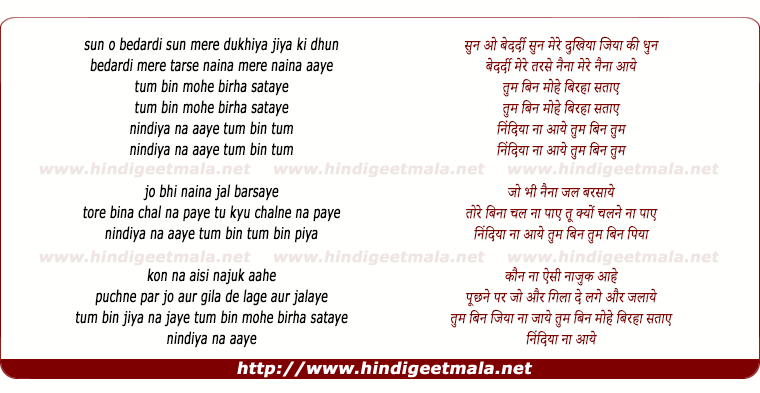 Comments on song "Nindiya Na Aaye Tum Bin Piya, Tum Bin Mohe Birha"
RituPM :) FEELThePurityPeace&DepthINMusicINYourShr on Sunday, December 19, 2010
A precious "biraha" song of separation angst, by Lata ji, bringing out the
pathos within! Mirza Ji, I love the convincing pictorial depiction of it
you've portrayed, with your ever discerning eye for Art, & thought put into
it! How I see it, eg; @ 1:10 the lush serene lavish palatial grounds she's
in, quite in contrast to her emotions, only highlight the fact that the
worldly comforts don't hold a light in front of a caring human touch that a
lonely Soul really needs in Life! Poignant! 18DEC.10'

S Qasim Hasan Zaidi on Sunday, December 19, 2010
@sqhzaidi (cont.) lagey na mora jiya, ghar aaja ghir aaye, aaja re tera aik
sahara, hum thay jinke saharey, ab mera kon sahara, na tum be wafa ho, Na
koi umang hai, ye shaam ki tanhaiyan and countless others I will continue
to recall. I am thankful to @ritupm for forwarding this song to me. I was
delighted to read her comment as well as of other friends like @jasbongy,
@BharatGul etc. Thanks are due to Mirza ji for such a marvelous upload.

jasbongy on Saturday, December 18, 2010
I find every thing here just BEAUTIFUL. 1. Song selection. 2. Lata ji's
rendition in her soulful singing. 3. Lyrics and music.and last but not
least 4.Mirza ji your Golen Touch to any song to give it more bright glow
by presenting song/video with awesome, appropriate pictures. Thanks for
sharing. Thumbs Up. With respect. Sarla.

Bharat Gul on Saturday, December 18, 2010
Magnificent, Ilyas Bhai. What sweet murkis again in Lataji's voice ! And
how beautifully you end this clip, a flight of storks leaving some temple
pond. A stunning image. Wonder who the painter is(was). Thank you again for
what you do.