Video of this song from youtube
Average Rating : 4.51
Total Vote(s) : 41
Please rate this song between 1 star and 5 stars (5 stars being the best). Just move your mouse on the stars above and click as per your rating. Your rating will really help us to improve our website. 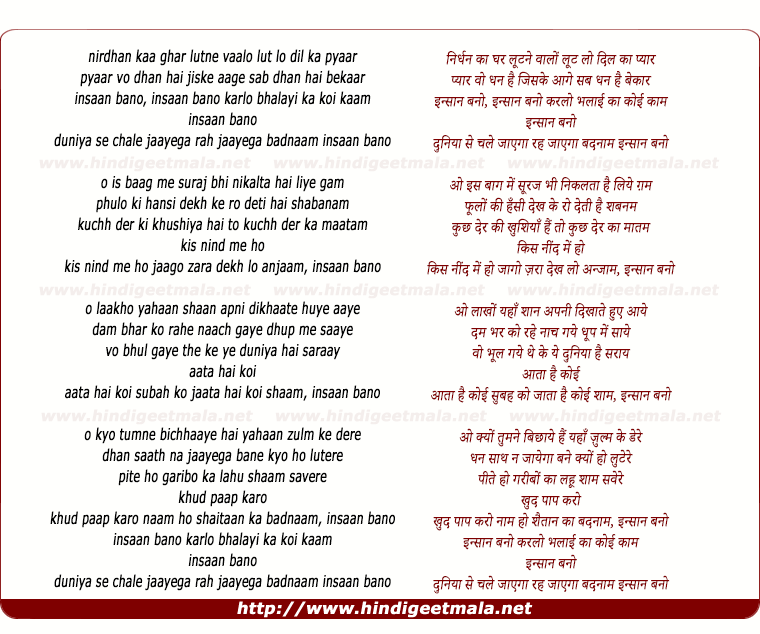 Comments on song "Nirdhan Kaa Ghar Lutane Vaalo Insaan Bano"
spsyed on Saturday, July 31, 2010
Rafi sahib passed away 30 years ago (31 July 1980), but his legend lives on as his voice still continues to entertain and amaze millions around the world. No one replaced humble, modest and pious Rafi sahib. He changed Indian film playback and music industry forever. He is a book on how to sing. His playback voice changed the fate of most Indian film actors, and made them superstars of their time. I am honoured to have met him, be his family's neighbour in London-UK. RIP Mohammed Rafi.
99farooque on Thursday, July 04, 2013
kiya baat hai...at 2:24 kiyoon tum ne lagaye hu yahan zulm ke
dhere./.dan saaath na jaye ga bane kiyun hu lutere./...peete hu
ghariebon ka lahoo sham sawerey/...khud paap karooo...kud paapkaroo nam
hu shaitaan ka badnaam/... INSAAN BANO.. thanks for uploading a nice
song..

aceji on Friday, April 09, 2010
The essential meaning of the song is: Become human, do good,your GOOD NAME
will prevail even when you are gone. Why all these cruel deeds,you do BAD
and SATAN gets a bad name. Just be good humans. It is a complaining and
pleading song to improve human condition,as per film story.

Priya MyMusicalHeaven on Friday, February 20, 2015
Character is like a tree and reputation like a shadow. The shadow is what
we think of it; the tree is the real thing. -- Abraham Lincoln
These words of Lincoln are indirectly reflected in this Baiju Baawra-song
that has moved many. Thanks for this gem, MKji.﻿

maham01 on Thursday, August 30, 2007
who so ever loaded this video i request. PLEASE PLESE PLEASE... if u are
a true music love load the first BHAJJAN of baiju bawraa in which baiju is
a kid and singing with his father on Ek-taara... i'll be
obliged..UMER KHAN