Video of this song from youtube
Average Rating : 3.97
Total Vote(s) : 37
Please rate this song between 1 star and 5 stars (5 stars being the best). Just move your mouse on the stars above and click as per your rating. Your rating will really help us to improve our website. 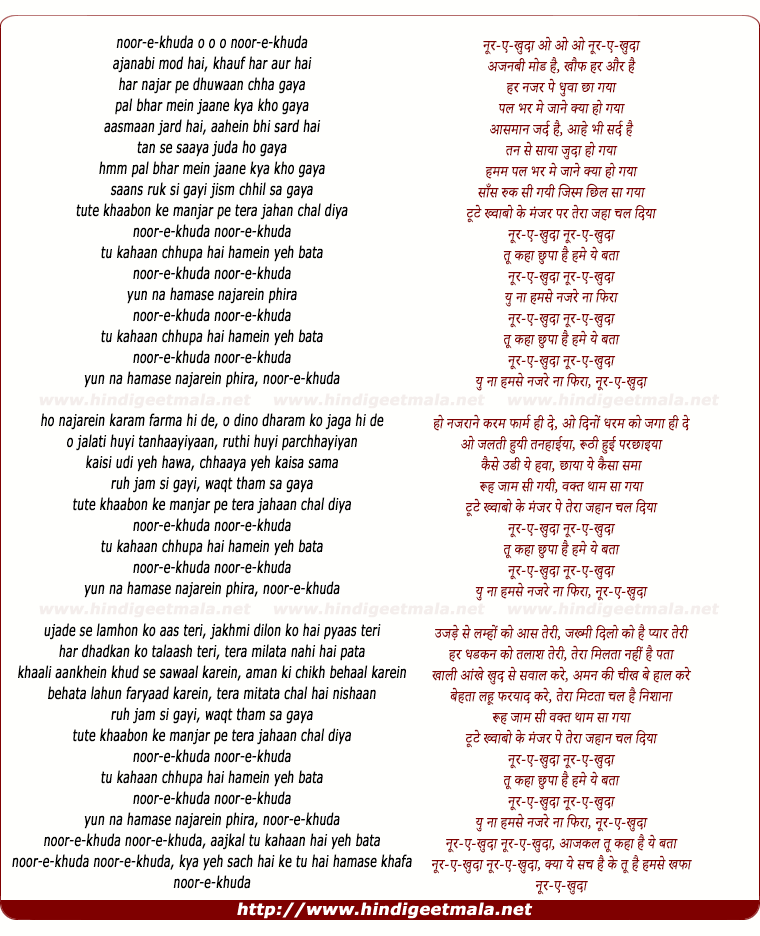 Comments on song "Noor E Khuda, My Name Is Khan"
malikmanzoorkhan on Tuesday, May 18, 2010
shahrukh khan the king of all the film industry in the world.and shahrukh khan love peace and say in the world my name is khan and i am not a terrorist.i love you shahrukh khan.
varunmaxy on Friday, April 09, 2010
no words for dis song its simply amazing so much emotional m speechless brilliant job shankar and adnan its awesome ...m speechless once again
Zehragirl on Sunday, January 09, 2011
@Eragonfinarel Well,atfirst Allah never does any injustice. Its important to what scale you're a good human. An example in the era of National Socialism it was smething good for adolf hitler killing innocent people,bt Allah has forbidden to kill innocent people. or another example: A person who helps another person, a person who saves the life of smebody is tht smething against wht Allah said in the holy quran?No,its nt tht is smething whts good. iÂ´ve a video wht can reply ur question better :)
lovealeslam on Wednesday, April 04, 2012
I hope the movies Shah Rukh Khan on the same level of this film,My Name is Khan movie discuss the global issue,film meaningful, clean,it does not contain scenes that offend the modesty, a film remarkable in every sense of the word. I hope to see Shah Rukh Khan always like this, I really liked the scenes that was Shahrukh read the Qur'an,face of ShahRukh Khan increased light when he was prostrate and pray to Allah. Allah guide him to the straight path and happiness in this world and the afterlife
neilchomsky on Tuesday, May 10, 2011
@Imix1973 I have understood but this movie is humanity-based normative film. I am fan of SRK but when it comes to code of life then its Quran of course. My religion Islam is the only way to success. If you do research I mean massive research on Islamic teachings only then you would understand this religion is for human betterment and farewell. I also love SRK and I love this film but this is just a film and its nothing in front of my religion. Don't panic and feel easy. Just understand Islam :)
View all 201 comments related to song Noor E Khuda, My Name Is Khan
Popular Links on HindiGeetMala