Average Rating : 4.12
Total Vote(s) : 345
Please rate this song between 1 star and 5 stars (5 stars being the best). Just move your mouse on the stars above and click as per your rating. Your rating will really help us to improve our website. 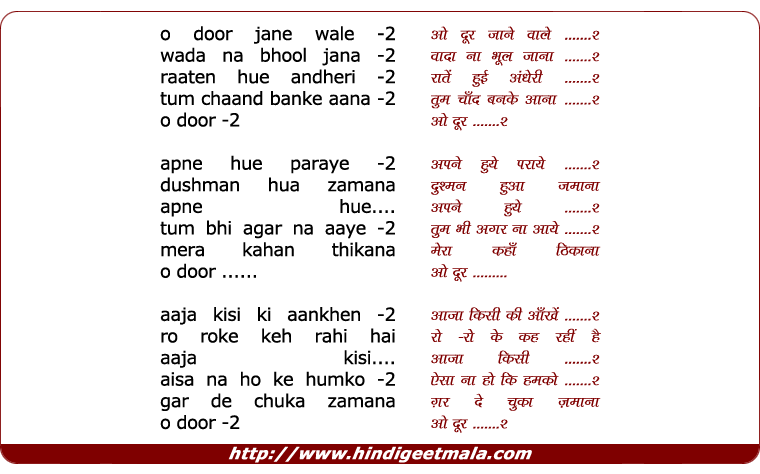 Comments on song "O Door Jane Wale, Vaada Na Bhul Jana"
RituPM :) FEELThePurityPeace&DepthINMusicINYourShr on Wednesday, February 17, 2010
What a simple yet seductive tone Suraiyya sings her songs with, be it
cheerful, romantic or melancholic like this one. The melodic but wispy
huskiness unique to her voice is what I identify her with. Definitely a
delight to listen to her sing & as 'chamogaaji' (it's shorter than Vipan
Uncle, for future reference:) also stated, FUN to hum along with, while
enjoying her lofty dreamy musical cadence!:) The lyrics speak to me of
being that "door jaane vali musafir" to India soon!:) Thanks Suhanee!:)

Kay Cee on Friday, March 12, 2010
I love your comments : 'she is good but not intimidatingly so' , something
that can actually be a wonderful prodding and encouragement to those who
would want to make an attempt rather than getting cowed down under the
weight of a role model's reputation and his/her's obviously crushing
talent. Pl accept my regards. Suraya of course has no peers: she was a
class by herself, a complete package. Thanks Suhaneeji for uploading this
gem.

V. Siddhartha on Tuesday, February 16, 2010
Excellent intro to Suraiyya along with an excellent song. I still often hum
the Suraiyya -Shyam duet Tu Mera Chaand Main Teri Chandni from Dillagi and
the Suraiyya-Mukesh duet Laayi Khushi Ki Duniya from Vidya. I love her
voice. Her simple yet melodious style gives me the confidence to hum after
her ; she is good but not intimidatingly so. Thank you for the
upload,Suhanee.

kuckudk on Tuesday, February 16, 2010
Congratulations Suhanee for getting back your old channel. I will check it
out once again with renewed interest my Mother used to sing.this old song.
You have given lot of interesting information with this upload which shows
how much effort you put in, while uploading your cherished old songs.