Average Rating : 4.38
Total Vote(s) : 13
Please rate this song between 1 star and 5 stars (5 stars being the best). Just move your mouse on the stars above and click as per your rating. Your rating will really help us to improve our website. 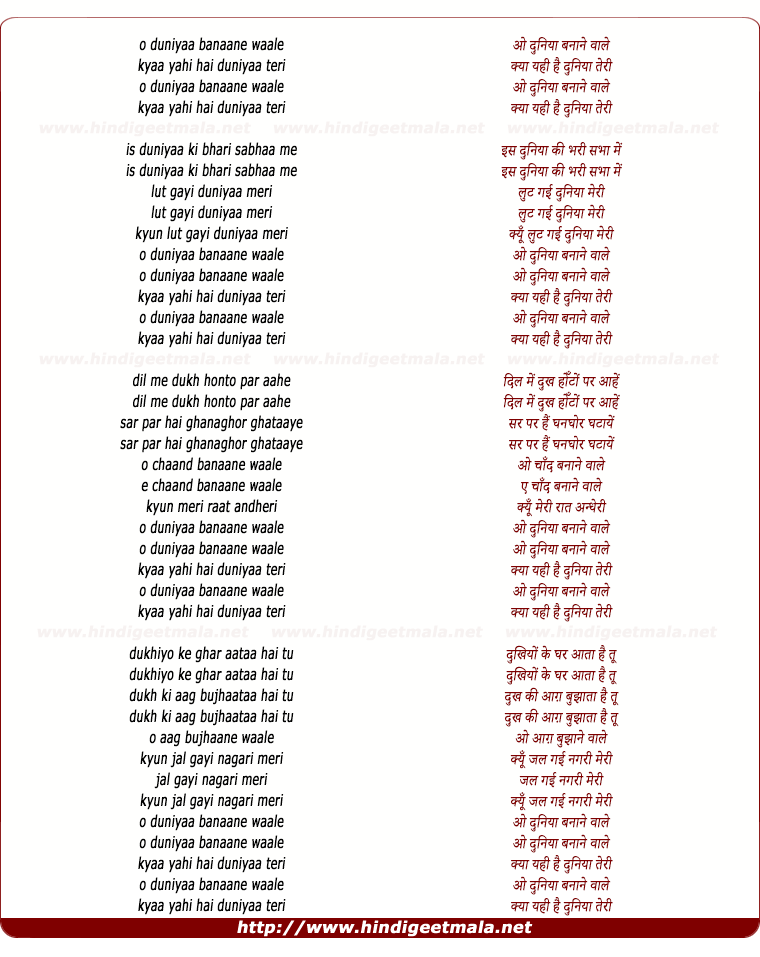 Comments on song "O Duniya Banane Waale Kyaa Yahi Hai Duniyaa Teri"
ved prakash on Monday, August 22, 2011
I totally agree with u and add that most of thousands of Lata's songs are
not worth listening at all by discerning listeners like u being
commercially chaloo or being cheap songs for cheap commercial purpose only.
The kind of soz/dard and special murkis and melody which Amirbai
Karnataki's voice possessed is not there in Lata's voice. However, Lata's
voice had the freshness suiting teenaged girls.

Riaz Ali on Friday, March 04, 2011
Every song of Amirbai is worth-listening. She had its own grandeur and
dignity in her heavenly voice. Thanks.

Brikeshwar Tiwari on Monday, June 09, 2014
If i am to rate top female singers for the last 100 years then i shall put
amirbai kernatki on top of the list with khursheed bano and johrabai
ambalewali as2nd and 3rdfollowed with lata and suman kalyanpur,geetadut and
asha﻿

Dee Thakore on Sunday, January 17, 2010
She was famous as Kannada Kokila. Mahtma Gandhi was her one of the fan.
View all 7 comments related to song O Duniya Banane Waale Kyaa Yahi Hai Duniyaa Teri
Popular Links on HindiGeetMala