Video of this song from youtube
Average Rating : 4.35
Total Vote(s) : 240
Please rate this song between 1 star and 5 stars (5 stars being the best). Just move your mouse on the stars above and click as per your rating. Your rating will really help us to improve our website. 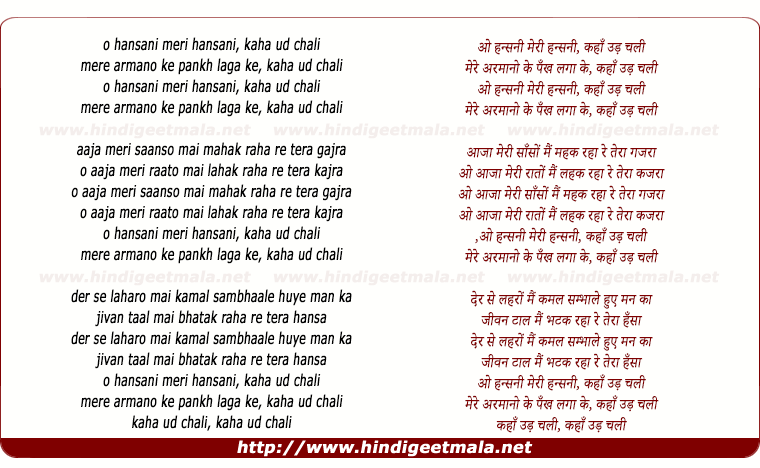 Comments on song "O Hansani, Meri Hansani Kaha Udd Chali"
jaragaraj on Sunday, August 15, 2010
What a song! my favourite..
BTW, you must listen to the same song in the original Kannada movie (that too had slow motion). it starts with Baare Baare. ZEHREELA INSAAN (74) was directed by Puttanna Kanagal afte the super success of Nagara Haavu (71). The story and the songs are all super duper hit. Unfortunately his hindi version sunk in the boxoffice, except for this one song :-(. And Vishuvardan was far more ferocious in the movie true to the movie name.

scarletbabe26 on Tuesday, January 05, 2010
A great song from the sadly underrated Zehreela Insaan. The movie was depressing but Rishi's performance as a missunderstood bad boy was powerful albeit the opposite of his Bobby character. It was not what his audience wanted. He even looked different with his mush & bulked up bod but I liked his look and the movie just fine + the songs were pretty good too.
Kevine321 on Tuesday, March 01, 2011
Beautifull song from an era when MELODY WAS KING-not shouting- why can't Bolywood produce songs like these any more, when there is an abandant of talented music directors.Iis it because no one good enough to sing??? Can someone please explain???
rahul sinha on Wednesday, February 19, 2014
Originaly the song was offer to sailendra singh but when he came for
recording on that day musician were on demonstration for increase on their
fees and after few days when every thing got normal R.D change his mind and
called kishore da.﻿