Video of this song from youtube
Average Rating : 4.68
Total Vote(s) : 19
Please rate this song between 1 star and 5 stars (5 stars being the best). Just move your mouse on the stars above and click as per your rating. Your rating will really help us to improve our website. 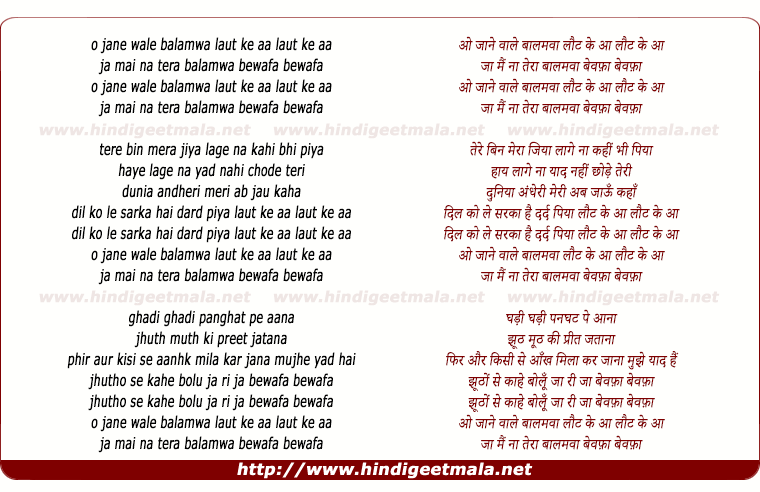 Comments on song "O Jaane Wale Balamwa Laut Ke Aa"
mastkalandr on Friday, February 10, 2012
@radh193.. Truly said.. In-fact Ratan(1944) was a turning point in Hindi
movie music. Before this movie, the movie music was based on classical
music. But the music of this movie broke new grounds and introduced music
based on folk music. And the folks (ordinary public) lapped up this music.
And soon, every other music director jumped onto the band wagon and Hindi
movie music began to enjoy much higher level of popularity among
public...Thanks for sharing my small tribute ..

Shalin Bhatt on Sunday, October 28, 2012
Sorry, not "Aayi Diwaali", but rather "Mil Ke Bichhad Gayi Akhiyaan". Aayi
Diwaali was picturized on Swaranlata and sung by Zohrabai, whereas the
other song in question was sung by Amirbai and picturized on Azurie. My
mistake.

mastkalandr on Monday, June 13, 2011
@laxmanboolchandani ..You are most welcome my dear friend.. Thanks for
sharing yesteryear's golden memories with an immortal GEM

radh193 on Friday, February 10, 2012
in my opinion best song of film' ratan'.which is full of best songs.i think
this film's music put up Naushad sahib in frontline among the best music
directors of that time, which are still greatest, like punkaj mullick, anil
vishwas, gulam muhammed, c . ramchandra.all these greats gave very
enchnting songs to us, but at that time a young naushad went on scoring
victory after victory. thank you mast kalandr. mast kar diya