Video of this song from youtube
Average Rating : 3.38
Total Vote(s) : 8
Please rate this song between 1 star and 5 stars (5 stars being the best). Just move your mouse on the stars above and click as per your rating. Your rating will really help us to improve our website. 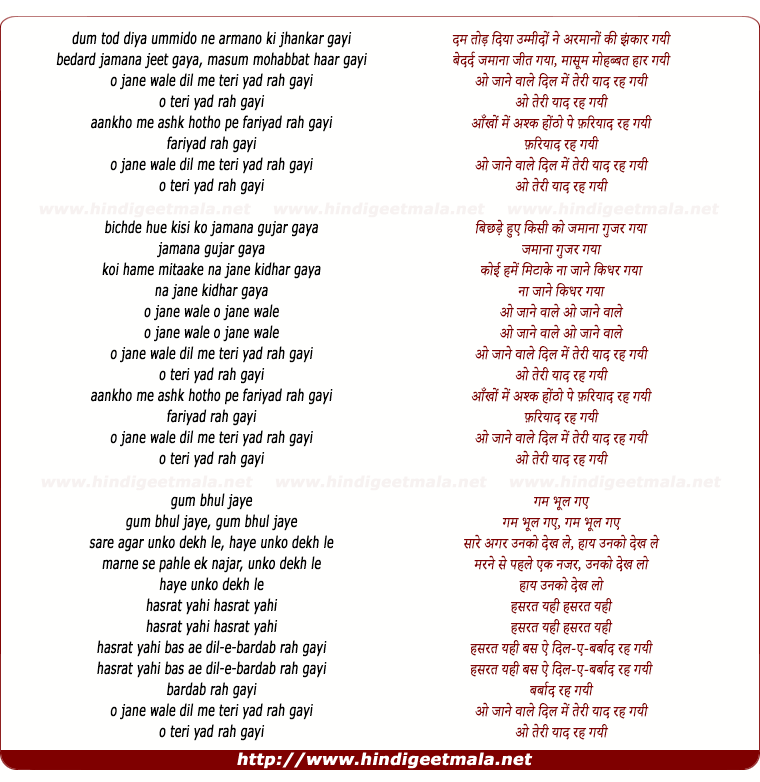 Moid Hasan on Monday, July 04, 2011
This is a cancelled song from Stage 1951,Dev Anand, Ramola(Jewish ) cuckoo
and sunder ,composed by Husnlal Baghat Ram, Directed by Vijay Mathre. This
song of geeta Roy evokes nostalgic memory through the efforts and courtesy
of a great auploader non other than Rehma A sad and heart rending rendition
of Geeta Roy.thanks Rehma for the introduction of this unheard song.

anmolfankaarsite on Wednesday, October 09, 2013
Many places people are mistakenly stating that it is composed by
Husanlal-Bhagatram. This song is actually composed by Sardar Malik. The
lyrics are of course by Sarshar Sailani. It is not a cancelled song and was
issued on record no N36684 by HMV.

Moid Hasan on Monday, July 04, 2011
One of the best things of this clip is the Geeta dutt and Gru Dutt's still
photos that have doubled the impacts of the song since gru dutt ji died
long before Geeta Dutt,Kudos goes to Rehma for this deep concentration .