Video of this song from youtube
Average Rating : 4.24
Total Vote(s) : 342
Please rate this song between 1 star and 5 stars (5 stars being the best). Just move your mouse on the stars above and click as per your rating. Your rating will really help us to improve our website. 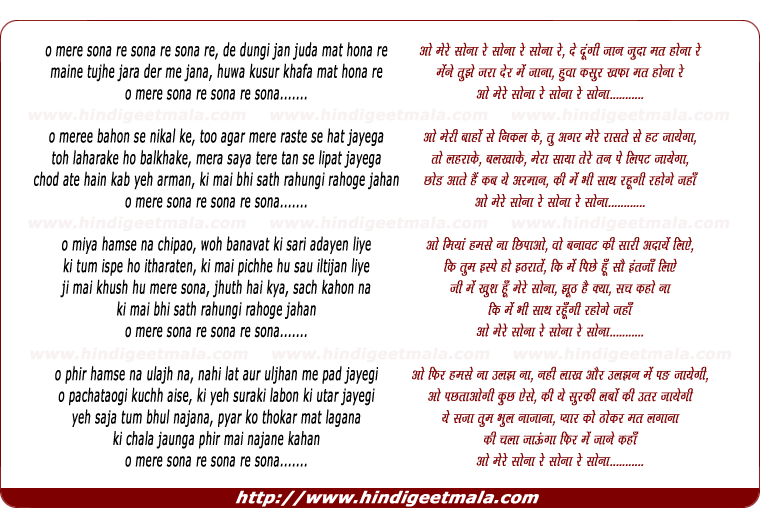 Comments on song "O Mere Sona Re Sona Re Sona Re"
phoebefor on Saturday, April 24, 2010
My fave Quote by Asha Parekh: "Today's songs are not very melodious. When
you have a romantic song how can you have 100, 200 boys and girls dancing
behind, where do they come and go, it looks very funny to me. Also the way
of picturising a romantic song has lost its meaning. I may be totally
wrong, but when we had these romantic songs, there was a story to tell in
that song, whereas right now there are all exercises and aerobics going on"
You gotta love her!

sal salmahn on Wednesday, December 29, 2010
Beautifull song.Thank y my friend for this video.A lot of people should be
thanking y because y showed the words and also in English.One of the best
video on youtube.Keep up the good work filmiflicks.

freakifresh4eva on Sunday, March 28, 2010
i love this song!!! i remember listening to it when i was little & i used 2
always dance 2 it, not like i'm old but ya! there's a unique soul to these
oldies, i just love this song! best ever!

Melancong48 on Sunday, January 10, 2010
a heart throbbing song to listen...it brings back the memory of the yester
years of hindi music sung by both the singers.

swapneel mantri on Sunday, June 13, 2010
chk out the way Shammi ji dances at end of the song...most free-will and
masti dance steps.amzing...