Video of this song from youtube
Average Rating : 4.47
Total Vote(s) : 68
Please rate this song between 1 star and 5 stars (5 stars being the best). Just move your mouse on the stars above and click as per your rating. Your rating will really help us to improve our website. 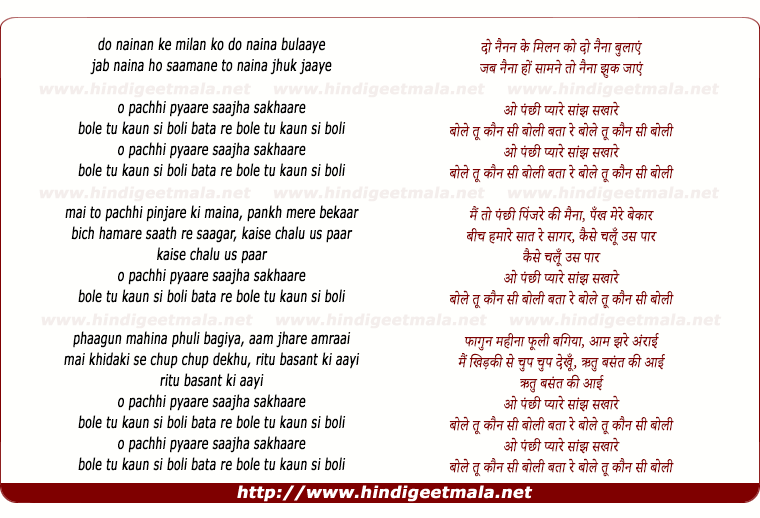 Comments on song "Do Nainan Ke Milan Ko, O Panchhi Pyare"
Moti Lalwani on Tuesday, January 07, 2014
For the preludes and interludes in the song, Pancham assisted by Manohari
Singh had composed music which Dada Burman didn't like at all and rejected
it.

Admonishing them, Dada Burman told them "In the scene, the imprisoned girls
are in the act of cleaning the grain with 'supra' and grinding it with
'Okhal mohal'. Compose the music based on the scene, not some music which
is not at all connected with it".

For the grain cleaning/sifting with the help of a 'supra', it was Dada
Burman's idea to get a real supra and use it to create the sound effects.
(Source: My interviews with those present) ﻿

Paul Krist on Monday, July 30, 2007
This is indeed a superb video of rare beauty. It is a most vivid creation
of a rustic scene to which SD Burmana's splendid classic-folk tune, the
lilt and the melody contributed by the inimitable Asha B., and the lustrous
beauty of action by the Nutan of a bygone Golden Era with a bevy of
impressive actresses wonderfully enacting rural womenfolk - are all equally
glorious ingredients. Contrast all this with the crass and crude obscenity
that marks all aspects of current films.

URobots on Sunday, October 14, 2007
For the first time, I heard and saw this song. And believe me, it is love at first sight! As you know, it is very unknown chemistry when we talk about love. There are some "elements" which match and makes this attraction called "love" possible. In this song, i think it is simplicity, beauty, and sadness of helplessness that is striking. It will attract anyone anywhere who has or had a matching element to one of these in his or her life. Thanks for this, BELLZTOLL!
Abhay Das on Friday, May 04, 2007
This was the fist song that I saw on television in 1982 during the Asian
Games some time around 18 Nov . I immediately fell in love with this song.
flleting scenes of Nutan is breathtaking and the inmate singing the song is
so full of life and inside jail!

Debooou on Thursday, December 25, 2008
Truly this is unique song expressing innocent and "komal hriday bhavna" of female in such beautiful way. Only people wih heart can understand these tender feelings of female.
View all 32 comments related to song Do Nainan Ke Milan Ko, O Panchhi Pyare
Popular Links on HindiGeetMala