Average Rating : 4.31
Total Vote(s) : 294
Please rate this song between 1 star and 5 stars (5 stars being the best). Just move your mouse on the stars above and click as per your rating. Your rating will really help us to improve our website. 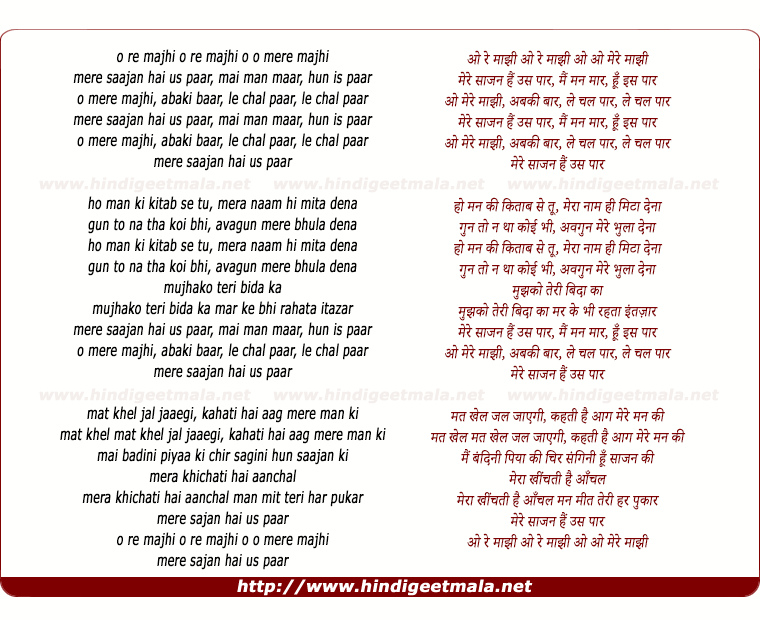 Comments on song "O Re Maajhi, Mere Saajan Hain Us Paar"
sonny19xx on Tuesday, January 05, 2010
Earth shaking song ! How SD breaks his voice and creates an effect that is
unequalled. The movie is another classic and the song so befits the scene
and the story. Nutan is so expressive and there is little of Ashok to see
in this movie. Terrific treat all right. The imperfection in SD's voice is
so perfectly rendered. This movie has become a part of folk lore of hindi
film music. These days are never gonna come back and we have only memories.
THANKS A LOT rajan8550

Munib Samir on Thursday, January 06, 2011
The first reason is that the composers and singers were very committed with
their profession.They not only had deep knowledge of our classical music
but kept them self within the limits.They were proud of our classical music
and were not inspired by any other culture.They never wanted to be any
elvis or michel.They had and were much more than them.That is why these
songs are long lasting.

amoralis123 on Monday, April 20, 2009
Burman, wow! No words. Just one long sigh. It is probably one of the best
song ever written & sung. The words are simple yet they convey deep
meanings. What can any one say, except, thnx to Rajan8550, making history.
Great job. I hope U Tube have back up storage of terra terra butes to keep
them safe.