Video of this song from youtube
Average Rating : 4.40
Total Vote(s) : 167
Please rate this song between 1 star and 5 stars (5 stars being the best). Just move your mouse on the stars above and click as per your rating. Your rating will really help us to improve our website. 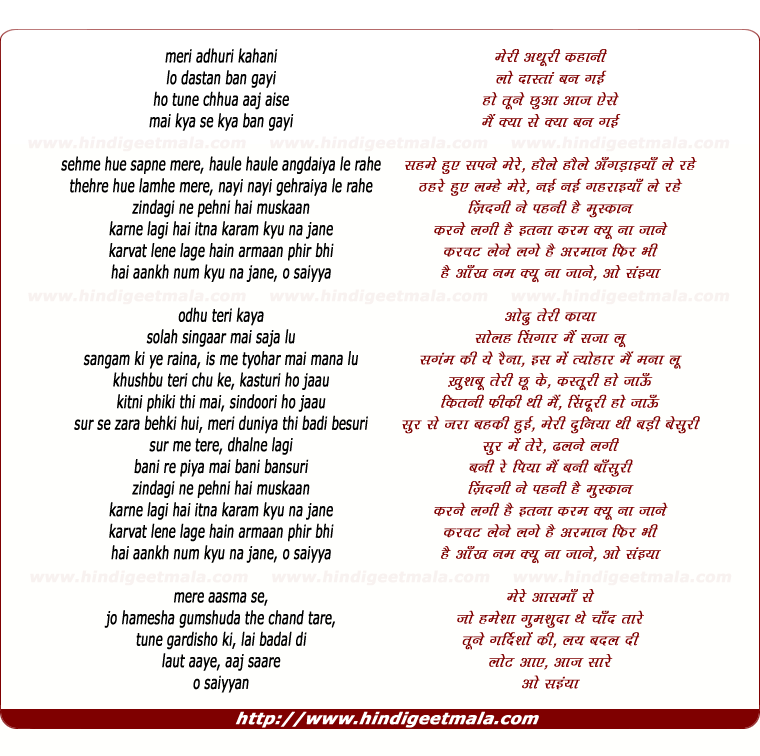 Comments on song "O Saiyya (Meri Adhuri Kahani Lo Dastan Ban Gayi)"
Shreyas7861 on Saturday, February 11, 2012
To be honest, I find Katrina Kaif to be a very inspirational actress. She has achieved very highly in the Bollywood film industry, even though she has faced many obstacles such as her poor Hindi.
What I find to be quite ironic though, is that the people who are criticizing and judging her have no idea about acting themselves. Just saying. :)

gOrjuzfOb on Tuesday, January 31, 2012
@MASTIII10 - I so agree. I went to watch this movie because of this clip,
the song is just gorgeous and then I clicked during the movie that this
song got cut and was so frustrated. There was nothing wrong with Chikni
Chameli but it felt like 5 mins of the movie was wasted on seeing Katrina
dance.

notanytimesoon on Friday, January 20, 2012
Everyone watches the video, enjoys the musics, looks at the actors and goes
away commenting on just the actors. Didn't anyone enjoy the beautiful voice
of the singer and great composition by the composer? Why are we just
confined to the two n

Lidia kace on Friday, January 13, 2012
Hrithik and priyanka are the only ones that can actually act in this
industry. And there talents are soooooo not recgonized by anyone b/c ppl
are blinded by the horrible beauty's and yester-year actors.

teeruvan on Wednesday, January 11, 2012
great music after a long time ! Indian movies need to work on their music
and this is might be the start,,thank god songs of this movie do not
contains any English lyrics,,,,,