Video of this song from youtube
Average Rating : 4.41
Total Vote(s) : 247
Please rate this song between 1 star and 5 stars (5 stars being the best). Just move your mouse on the stars above and click as per your rating. Your rating will really help us to improve our website. 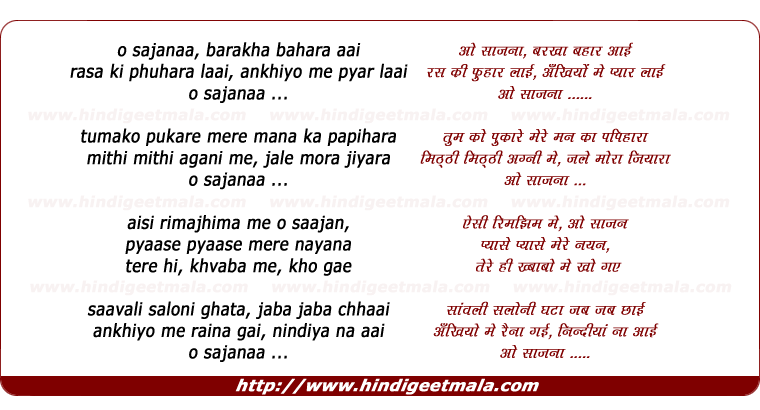 Comments on song "O Sajna, Barkha Bahar Aayi, Ras Ki Phuhar Layi"
rumahale on Thursday, August 02, 2012
True; such songs do not need much publicity, but, one is duty bound to tell
few words having been impressed so much. As other learned viewer has
expressed, I too will be brief. A classic number, magic creation by
Shailendra, Salil Chowdhary and Lata Mangeshkar and on screen Sadhana
Shivadasani performing splendidly. Thank you for the excellent video
presentation.


hammettsatriani on Saturday, December 15, 2012
You see it is so depressing to note that even the Government of India is
not taking any notice of many gems in the society. Salil Da wasn't even
awarded Padma shree. He will always be remembered for his heart touching
music. Kai baar yun hi dekha hai, itna tu mujse na pyaar badha, kahin door
jab din. If I were to count all his beautiful music, a big book will be
filled. When such artists get some wider attention. Pt.Bhimsen joshi was
awarded Bharat ratna too late. There are still some .

Rakesh Sharma on Monday, August 05, 2013
Dear All, this is one of the best songs , ever written & composed in Indian
Music industry. Hats off to GR8 Shailender ji & Salil Da, for this immortal
melody. Lata ji is Marvelous, but what about the creators ? They get little
attention these days. Lata ji is not because of her talent alone but also
due to the lyricist and Music Directors of Golden Era: Shankar Jaikishan,
Madan Mohan, Naushad, Chitergupt, Roshan, S.D. Burman, C.Ramchander, Salil
Chouwdhry and many more-Dr.RKSHARMA