Video of this song from youtube
Average Rating : 4.42
Total Vote(s) : 824
Please rate this song between 1 star and 5 stars (5 stars being the best). Just move your mouse on the stars above and click as per your rating. Your rating will really help us to improve our website. 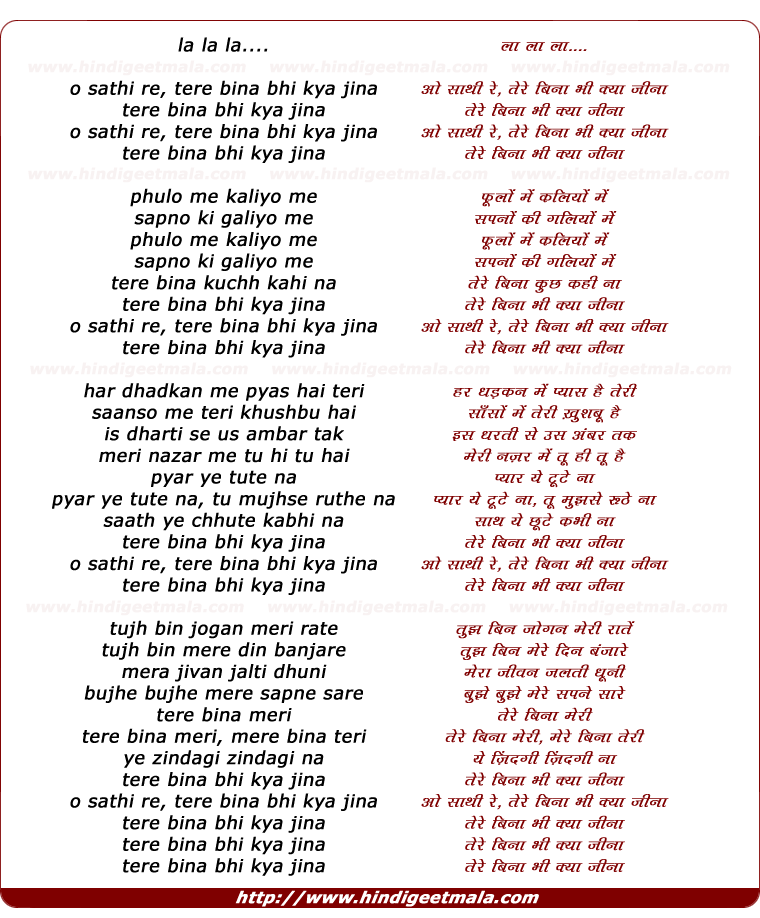 Comments on song "O Sathi Re, Tere Binaa Bhi Kya Jeena"
dpremi1126 on Thursday, May 07, 2009
Indian old songs with clean words with good way of expressing it make
people to attract towards its and make heart soft and tears eyes. I suggest
those people whose heart become like stone due to materialist life listen
old good Indian songs it make hearts soft and love among mankind as a
husband wife as a neighbor as a freind .indian culture teach love to all
world. Oh Indian please just goes back to your old songs and feels the test
of life. Indian old films were very nice and love by all

ggaurav on Wednesday, November 04, 2009
and then how can people compare shahrukh with Amitabh Bachchan ...I mean
there is no comparison at all ...shahrukh can not even be compared with
Aamir how can he be compared with Amitabh...???? According to those times
Amitabh was much much much popular than shahrukh and he did much much
better movies than shahrukh u can watch amitabh's oldest movies and will
never feel that his acting is out-dated however u watch shahrukh of 90's or
even 2000's u will feel like crying or laughing...

Matloub Husayn-Ali-Khan on Friday, October 12, 2012
A very underrated Amitabh Bachchan 1978 film: "Muqaddar Ka Sikandar" best
remembered for the song:"O Saathi Re" by Kishore Kumar & Asha Bhosle. It
became a third blockbuster bollywood film of the decade after Sholay and
Bobby. I first saw it in the early 1980s! I have always loved the song O
Saathi Re & Amitbach acting performance matched the song perfectly. Great
film that deserved more recognition in terms of film awards!

Kay Cee on Wednesday, July 08, 2009
Can't forget the first time I had seen this movie, and particularly, this
very song. It had left me goovey eyed as if someone is singing for me!
Heart starts melting within:such is the verve in this excellent rendition
by KK and matching screen presence of AB. Thanks for memories. Lovely
upload. Kanwal

ploeppetje on Thursday, August 14, 2008
this is his own voice dude,LOL

Kishore voice would be more beautiful of course coz he was the real singer
but Amit is proud of his own voice, you will find lots of songs that he sang them himself, that is one of the thing that make him the real king