Video of this song from youtube
Average Rating : 4.20
Total Vote(s) : 132
Please rate this song between 1 star and 5 stars (5 stars being the best). Just move your mouse on the stars above and click as per your rating. Your rating will really help us to improve our website. 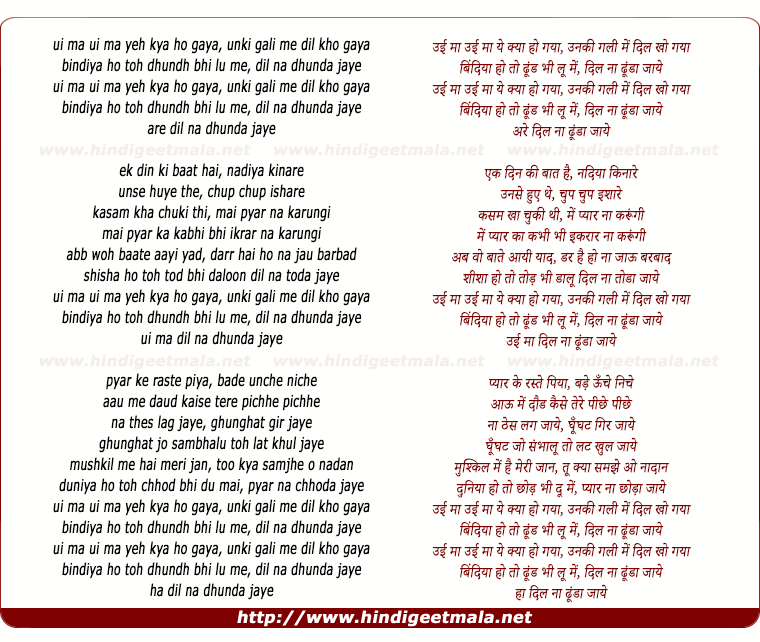 Comments on song "Oee Ma Oee Ma Yeh Kya Ho Gaya"
old24man on Saturday, March 19, 2011
This is from the movie Parasmani released in 1963. Helen was 24 years old then.
Naveen Dighe on Sunday, August 14, 2011
THIS MUST ONE OF THE FEW VERY RARE GOOD SONG MADE BY OTHERWISE PEDESTRIAN
NOISE MAKERS I MEAN MUSIC DIRECTORS LAXMIKANT PYARELAL THIS GUYS HAVE
SCORED MUSIC FOR MORE THAN 500 FILMS AND THE GREAT SHANKER JAIKISHAN FOR
147 BUT TILL DATE EVEN AFTER 60 YRS S J ,S SONGS ARE ENJOYED BY ALL THE
DIFFERENCE SHOWS THE DIFFERENCE BETWEEN THE VERSATILE HIGHLY TALENTED S J
AND MEDIOCORE ZERO TALENT NOISEMAKERS L P

Dilip S. Coulagi on Monday, June 20, 2011
The sweet voice reminds us why the whole nation fell in love with
it..lovely music of yesteryears, golden period of Hindi film music
- and dance with Helen in it! By the way, the translation is not very bad,
considering the difficulty in translating poetry.

Reincarnation on Tuesday, July 01, 2014
what a fantastic dance and choreography. a great delight to watch. such
classic moves
although this is folk style number. helen's moves are superb..just
perfect and crisp
but fluid at the same time. her costume and jewelry is gorgeous..even in
this black/white video.﻿