Video of this song from youtube
Average Rating : 4.00
Total Vote(s) : 19
Please rate this song between 1 star and 5 stars (5 stars being the best). Just move your mouse on the stars above and click as per your rating. Your rating will really help us to improve our website. 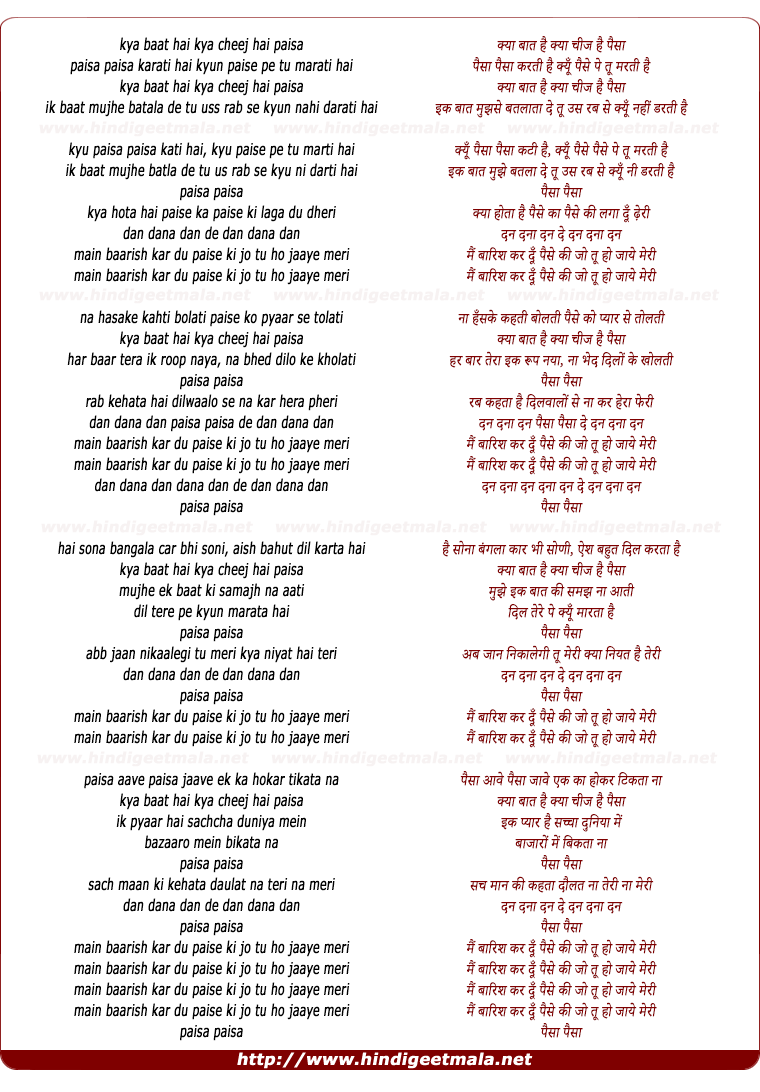 Comments on song "Paisa Paisa Karti Hai"
Zanarkke on Tuesday, September 14, 2010
@nivasha1 she is far from the most decent though! do you happen to remember
her first film? "boom" look it up if you haven't heard of it.. and as she
is an actress who's sole talent is "smiling" and "looking pretty" i am
pretty sure i can judge that if not her acting! and you did say "Let me
tell u that Kat does is much better than﻿ those so called INdian
actresses." so you did say she better looking than actresses in Btown! and
also regreting doing a film does not make you any more decent...

toobin on Monday, August 23, 2010
@johnnyfadi Np...to all those who replied to fadi, do you guys think that
if bollywood is trying to appeal to the international scheme, it's better
off? People still appreciate the movies from the 50s through 90s and watch
them over again... u can't really do that with these movies because they're
all contemporary, plus kids today can't watch anything.. yo we used to
watch kuch kuch hota hai when we were kids man.. miss those days. The
script, lyrics, all that stuff rocked during those days.

LoboDeBayamon on Thursday, January 13, 2011
@111bollywood111 Yes i do sorry to ask too you. Do you own a history book?, Do you know what a map is??.Do you know how many language exist in the world??.. NO??..okay!
Their over 202 sovereign states,36 inhabited dependent territories and 5 areas of special sovereignty and over 6912 languages in the world.
sow you would know english is not the only language. English is second in haft of the world.
i would love too see u speak spanish&punjabi,at least i try english on like you.
okay smartass

REXXBAILEY on Saturday, August 21, 2010
@Namrata7495909697 yeh datsalman that is the only worthwhile thing he has
done since 1994 i:e launching katrina kaif's career & as far she is
concerned its obvious to everyone else dat she very much knew about
bollywood cause boom surely was an attempt to get into it..back in 2001 or
watever yer dat was & 1 doesnt need to get to know u to form an opinion
bout u gal..seeing wat opinion u ave on something as obvious as katrina
kaif,was enough to know the reach of ur thoughts and logic

Sam Looper on Monday, November 08, 2010
@DesigirlmalayaleeNY because she looks european, she's gone way more
towards her british parent than indian. my bet is if her genes had gone the
other way, she wouldn't have come this far. 1.She can't act half as well
some other newcomers I know. 2. The thing that's killing me is that just
because she's white and looks european people think she's beautiful.
Priyanka Chopra and Deepika's facial features are way more exotic. But
guess what? They're brown.reflection of India's society.