Video of this song from youtube
Average Rating : 4.41
Total Vote(s) : 29
Please rate this song between 1 star and 5 stars (5 stars being the best). Just move your mouse on the stars above and click as per your rating. Your rating will really help us to improve our website. 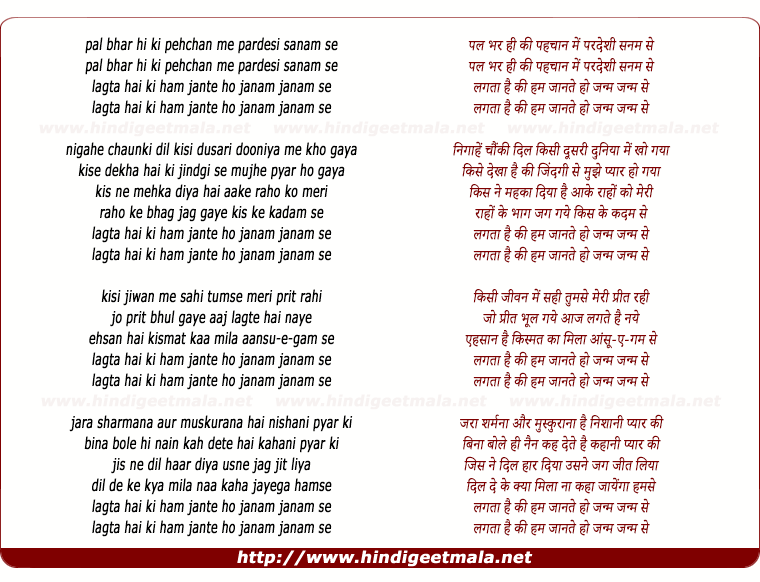 Comments on song "Pal Bhar Hi Ki Pehchaan"
rumahale on Tuesday, October 11, 2011
I have listened it early on radio broadcasts but without knowing much about
the movie. As mentioned in the other song I have mixed reaction for being
glad and sad. Thanks for introduction of this rare song.

Priya MyMusicalHeaven on Sunday, June 02, 2013
Mukeshji all the way - singer, composer, actor and producer! And what a
sweet, sweet song! I am so glad it is available on your channel, Ajayji.
Many thanks.

Bipin Kishore Sinha on Friday, October 22, 2010
It is a rare song sung by melody king Mukesh. Music was also composed by
him. I love this great song and singer by the core of my heart. Great
legeng Mukesh is physicaly not among us but he will remain AMAR in the
hearts of crores and crores for many centuries to come

Jayant Pingulkar on Tuesday, August 30, 2011
i heard this song for the first time n i must say this is one of the best
ever songs of mukeshji,so simple thought,yet so beautiful,great composition
by anilda