Average Rating : 4.44
Total Vote(s) : 209
Please rate this song between 1 star and 5 stars (5 stars being the best). Just move your mouse on the stars above and click as per your rating. Your rating will really help us to improve our website. 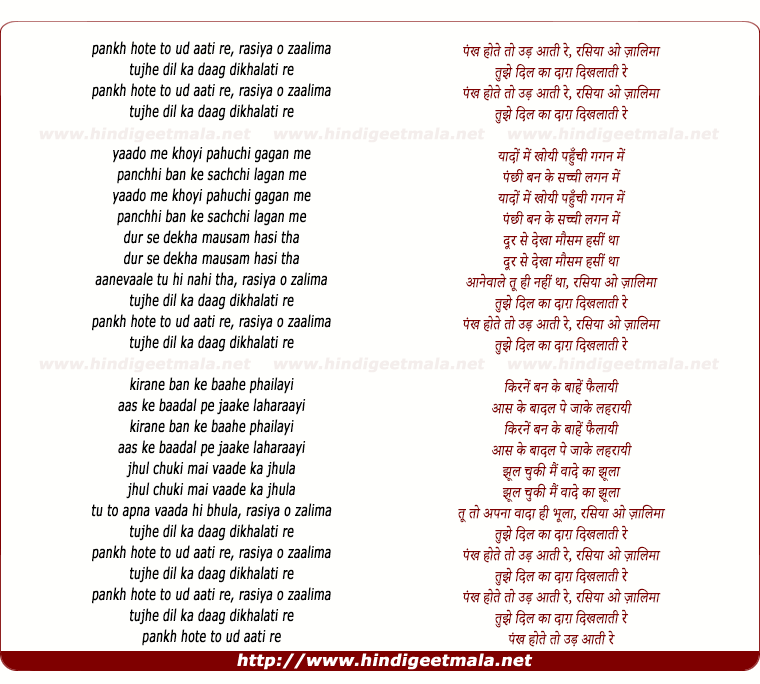 Comments on song "Pankh Hote To Ud Aati, Rasiyaa O Zaalimaa"
farooq1667 on Sunday, March 25, 2012
Fabulous song with theme of unfulfilled desire of being a fowl with wings. Height of imagination is coupled with music and honey sweet voice of Late Jee. Enchanting beauty of song makes us listen it again and again.
thecrucifer on Thursday, July 15, 2010
A song full of imagination. Is it a wonder Lata is considered by some to 'wake up the dead' with her voice. One of the all time greats of the Indian Cinema. I tip my hat to the music director for this immortal tune. Young Mumtaz looks, well young. Lovely video, probably ahead of its time. Loved this song since I was a young boy growing up in Guyana. And even more so, now!
V. Siddhartha on Monday, August 24, 2009
Lata and Sandhya-- and secondarily , Mumtaz-- exude so much exuberance in
this clip that at 1:07-1:09 one can see a white dove shaking its neck in
accord with the rhythm of the song( It may be my illusion to think the dove
is having a good time, but it's a nice illusion to harbor !). Beautiful
upload. Thanks, Yuan.


Y N bala on Wednesday, March 03, 2010
Soul stirring song. Makes one's day anytime.Thank you Mahagedara. I think
most ot the song is in Raag Bhoop or Mohana in Carnautic, a very melodious
raag. No wonder this tune could be heard in Mobiles now. How ahead of the
age this song is !!

Naveen Dighe on Thursday, September 24, 2015
ALL THE SONGS IN THIS MOVIE WERE SUPER HITS TWO YRS LATER THE CREATORS OF
THIS BEAUTIFUL SONG PANDIT RAMLALJI AND HASRAT JAIPURISAHAB GAVE ANOTHER
HUGE MUSICAL HIT GEET GAYA PATHERONE THANKS ZARAZARA﻿