Video of this song from youtube
Average Rating : 3.70
Total Vote(s) : 409
Please rate this song between 1 star and 5 stars (5 stars being the best). Just move your mouse on the stars above and click as per your rating. Your rating will really help us to improve our website. 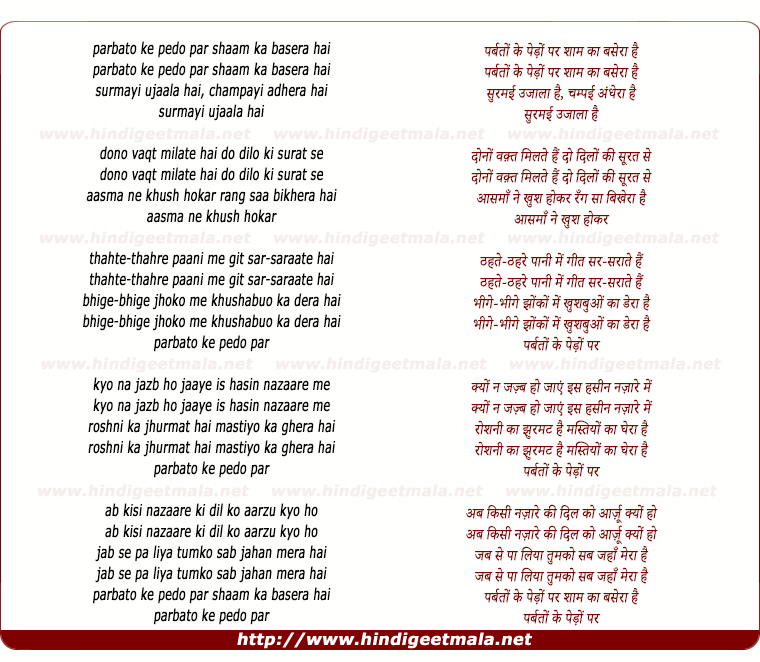 orientlover1 on Sunday, August 07, 2011
Surmayi (greyish, from surma i.e antimony used as a make up for eyes). Champai from Champa, a small golden flower. Parbaton ke pedon par shaam ka basera hai, surmayi ujala hai, champai andhera hai.
(Evening is falling on mountains, there is greyish light and golden darkness). The poet has described the evening scene just as the sun is setting over mountains).

Bajaury on Wednesday, March 20, 2013
I can't help but to put my two cents in. Waheeda was not a home wrecker,
Guru Dutt was. He wrecked his own house. People do fall in love but a man
who is in the company of all the beautiful women of India, ugly or
handsome, will fall for someone, in this case Waheeda. To me he seems to be
an unstable person. I guess he thought he was starting another legendary
love story: Laila Majnoon, Shireen farhad and Waheeda Guru Dutt.
Unfortunately Waheeda was no Laila or Shireen. Warped imagination.

safronfield on Sunday, September 08, 2013
Waheeda was involved with Guru Dutt, then with Vijay Anand but she wanted
him to convert to Islam, which he refused. This is at the time when 'Guide'
was being made, Vijay Anand was the director. They broke off. She then got
engaged to Farid Siddiqui in 1973. That engagement broke off. She later got
married to Kamaljeet who converted to Islam for her sake.