Video of this song from youtube
Average Rating : 4.42
Total Vote(s) : 132
Please rate this song between 1 star and 5 stars (5 stars being the best). Just move your mouse on the stars above and click as per your rating. Your rating will really help us to improve our website. 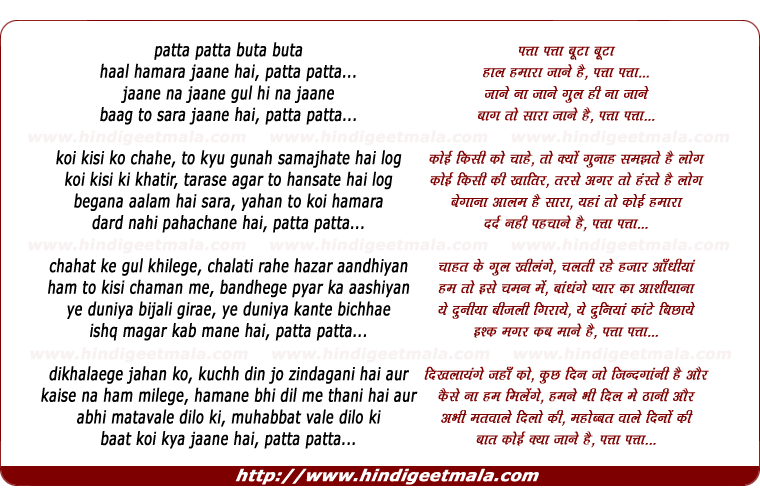 Comments on song "Patta Patta Buta Buta, Haal Hamara Jane Hai"
Indu Puri on Saturday, August 24, 2013
This song was originally written by a 18th century shayar called Mir Taqi
Mir. Lyricist Majrooh Sultanpuri drew inspiration from his work and wrote
this song. Prior to him, there were singers like Noorjahan and Mehdi Hasan
who had also sung songs based on this Mir Taqi Mir poetry. Laxmikant
Pyarelal is the music director. AM I RIGHT??

Harry Pinto on Friday, March 08, 2013
Thanks my friend for uploading such beautiful songs...all songs sung by
Rafi & Lata they have given special treatment to word so they appear to be
so effective...but unfortunately Mr. Rafi was not appreciated as per his
caliber...though if I compare I don’t find Lata a better Singer than
Rafi...u can listen or watch any of their duet that will prove my claim…but
she has been appreciated more than Rafi...I find it ridiculous…is it gender
biasness?

peterklus on Monday, May 27, 2013
Nitin-ji, the first two lines of this song are actually taken from a famous
ghazal by Mirza Ghalib, a highly-regarded Urdu poet who lived in
19th-century India. The rest of it is from some other source, perhaps from
the pen of the lyricist for this film. I find it rather unusual to mix
things in this fashion, but all things are possible in the Bombay film, and
the result seems to be quite splendid. ~ Dr Sudevan, Wisconsin.

VK malik on Saturday, May 31, 2014
Lataji is BHARAT RATN. NOORjahan along with her husband stole and took all
furniture from the movie set for which they were dragged to police station.
Maybe that,s why she had to leave India. Lata is 100% and Noorjahan only
33% while her name simply means jahan ka noor and that has nothing to do
with her singing quality !!﻿

peterklus on Monday, January 07, 2013
The first couplet is from a very famous ghazal by Mir Taqi Mir. I'm not
quite sure if the rest of the song is actually from the original poem. But
all the same, it is very, very lovely! Rafi Sahab and Lataji have done
their usual magic.