Video of this song from youtube
Average Rating : 4.38
Total Vote(s) : 64
Please rate this song between 1 star and 5 stars (5 stars being the best). Just move your mouse on the stars above and click as per your rating. Your rating will really help us to improve our website. 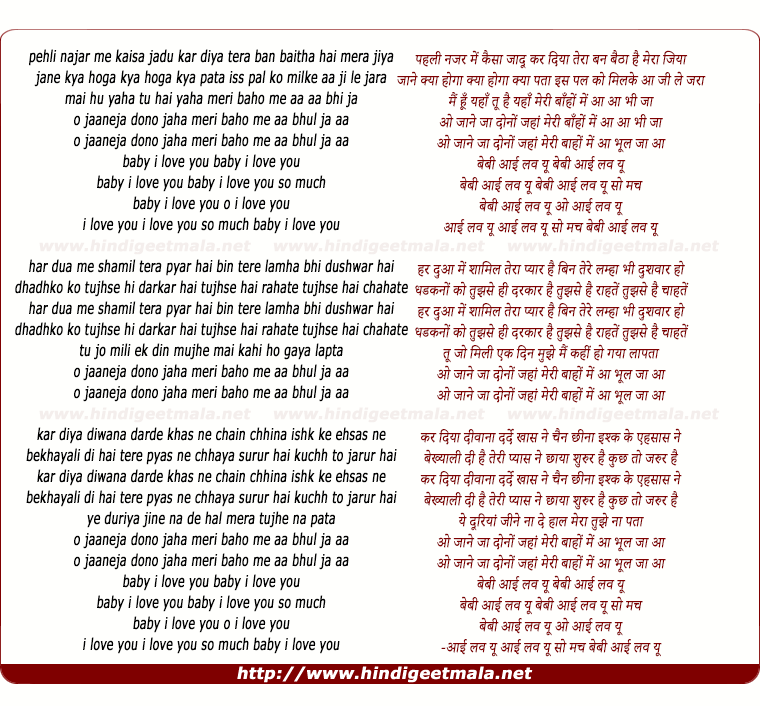 Comments on song "Pehli Najar Me Kaisa Jaadu Kar Diya"
nawabshaukat on Tuesday, February 08, 2011
@dingdongamerica Atif has not copied as he has only sung this song as a playback singer THe original culprit iz its COMPOSER that is PREETAM The copy cat and getting credit of other works HA HA HA
xven on Sunday, September 20, 2009
Pehli Nazar Mein Kaysa jadoo kar diya = At the very first sight, its like you put a spell on me.
Tera paan betha hai mera jiya = My life is placed/relies on you/yours.
Jaane kya hoga, kya hoga kya pata = Who knows what will happen, what happens who knows
Is pal ko mil ke aaj hee le zara = Keep this moment and take it/embrace it today.
Mai hoo yaha, tu hai yaha = I'm here, you're here
mere bahoe meh ah bhi ja = Come into my arms already

SlicKnife on Thursday, April 23, 2009
Everyone jacks everyone in the music industry...

Pehli Nazar Mein was a complete jack of this song, yes I agree.

Listen to the music of this song and compare it to...

Sting - Shape of my Heart.any similarities???

now listen to Craig David - Rise and Fall which came out in 2003... which Sting collaborated on, sounds even more similar to that version, right?! Crazy...

matinRajakar on Thursday, June 24, 2010
@msn0120 THIS IS THE popularized version of lee hom"s RENDITION.just like JAI HO was reproduced in english to promote orginal JAI HO. ATIF is the biggest singer in ASIA in terms of recognition and is also arguably the biggest singer in the world in terms of global popularity. ATIF is more popular than all chinese and korean singers combined :)
maropadaro on Thursday, June 18, 2009
I know pakiforlife, we have good and bad in all races. I just don't think people should be so ignorant. I mean come on, we live in the 21st century now so everyone should be educated enough not to judge. Hope you weren't offended by what I said. So this TalwarDishaan is a kid LMAO!!! What else can you expect from a child... :)
View all 659 comments related to song Pehli Najar Me Kaisa Jaadu Kar Diya
Popular Links on HindiGeetMala