Video of this song from youtube
Average Rating : 4.44
Total Vote(s) : 25
Please rate this song between 1 star and 5 stars (5 stars being the best). Just move your mouse on the stars above and click as per your rating. Your rating will really help us to improve our website. 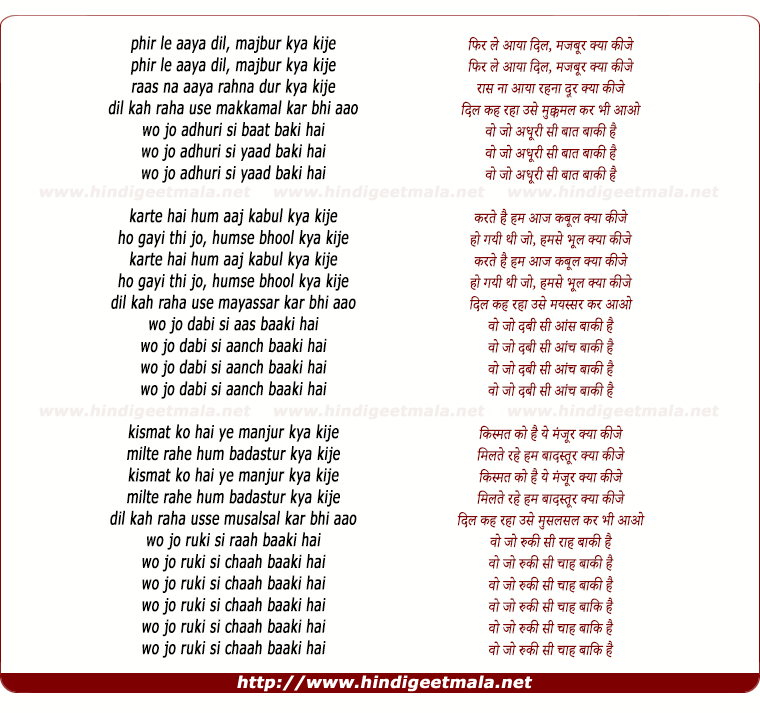 Comments on song "Phir Le Aya Dil (Redux)"
Waqar Ali on Saturday, September 29, 2012
You are comparing the tone of the two songs rather the singers, which is
not an apples to apples comparison. If the music sounds bollywoodish then
the onus goes to the music director Pritam who anyhow is a big copy cat.
Give Shafqat a free style to sing it as a ghazal and he will rip this song
apart. Baby he hails from a renowned classical musical family to whom Ustad
Bare Ghulam Ali Khan himself is a disciple. Let the music remain that of
Arjit's version and let Shafqat sing and improvise on it

manish srivastava on Tuesday, September 18, 2012
I like it but the one sung by Arjit Singh gives the best Touch n feel to
the heart... Shafqat Sahab has sung it very well but that feeling is
somewhat missing... its much looking like a Bollywood number... And its my
personal feeling which may vary person to person, so no hard feelings

rocky552 on Thursday, December 20, 2012
yea i agree...shafaqat saab sang it really well, but arjit singhs voice
sounds so raw and really brings out the emotion out of the movie as well as
the words in the song...hands down better

Shahrukh Naqvi on Friday, April 25, 2014
Shafqat amanat ali has sung it so beautifuly while arjit has gOod voice too
bt no competition with shafqat amanat he is jst beyond imagination really a
touchy beautiful voice. ﻿

Amit Bajpai on Thursday, July 18, 2013
it seems u credit a singer with his lineage more than his singing.i love shafqat saab too much but arijit has done a better job on this song...
View all 20 comments related to song Phir Le Aya Dil (Redux)
Popular Links on HindiGeetMala