Video of this song from youtube
Average Rating : 4.25
Total Vote(s) : 44
Please rate this song between 1 star and 5 stars (5 stars being the best). Just move your mouse on the stars above and click as per your rating. Your rating will really help us to improve our website. 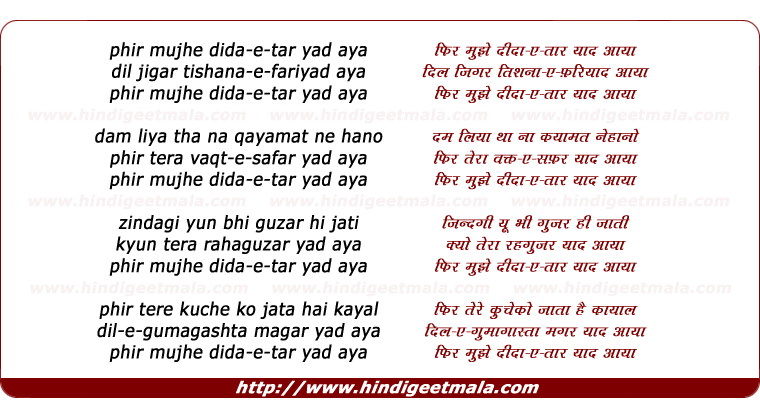 Comments on song "Phir Mujhe Did-Ae-Tar Yaad Aaya"
Abdul Qudus on Tuesday, April 28, 2015
Rafi will remain a legend, he was chosen to sing Ghalib by a Faqeer
(fantastic), however Ghulam Mohammad chose Talat when Ghalib had to recite
his own ghazals. Talat had that edge over all other the singers, it is as
sharp today as during his life time. Talat cannot be compared with Rafi.
Rafi was for every one, Talat was for those with a discriminating taste,
please pay attention to that ultimate control over his voice & a heartfelt
pain. I hope Rafi's fans do not lynch me.﻿

Abdul Qudus on Thursday, April 30, 2015
Some of us are angels offering prayers to god, while others are sinners who
drink & drift away. This is a real story, one is finding solace in prayers,
the other drinks & sings his own poetry; none gets what they want. But
provided an opportunity to many others down the road to become rich &
famous. I can identify with him.﻿

Ramchandra Bhandarkar on Friday, November 16, 2012
After K.L.Saigal, Talat was the only singer who presented Ghalib's soft
soulful melodies with any conviction. In the movie, Composer Ghulam
mohammed gave excellent music which remains evergreen even today. Thanks
for uploading this piece.