Video of this song from youtube
Average Rating : 4.67
Total Vote(s) : 49
Please rate this song between 1 star and 5 stars (5 stars being the best). Just move your mouse on the stars above and click as per your rating. Your rating will really help us to improve our website. 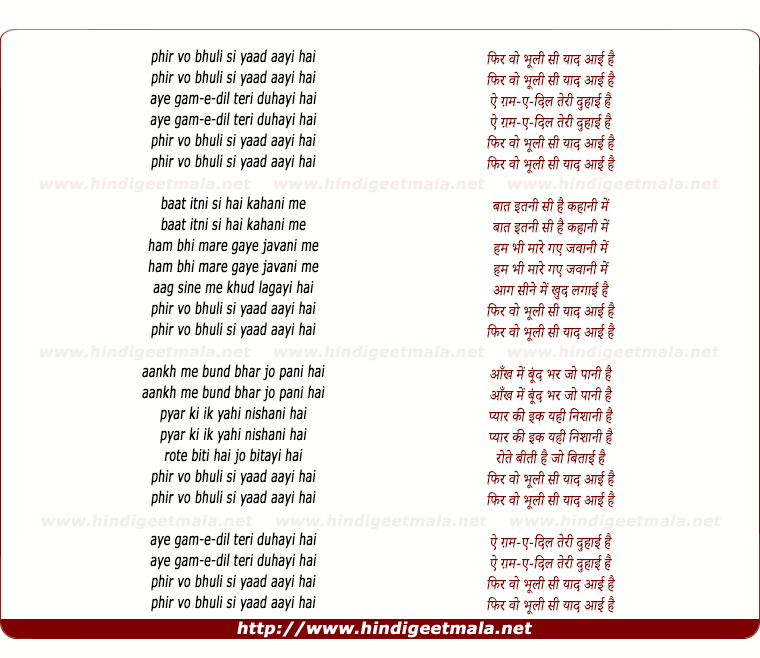 Comments on song "Phir Vo Bhuli Si Yaad Aayi Hai"
crazyoldsongs on Friday, August 06, 2010
absolute gem heard so often on vividh bharti during my school days . so much ''dard '' in rafi's voice . the cry from the heart sounds so real in the trembling of his voice as if rafi is crying while singing ! the soulful lyrics are again by the great shailendra . sapan jagmohan has done wonders with the musical score although he has a lesser no. of compositions than other more popular mds. amazingly dharmendra is also seen in the song . great video ! thanks
crazyoldsongs on Friday, August 06, 2010
another beauty about this song is that i have heard this complete version for the first time . the second verse'' aake manzil pe kho gaye '' is missing from the records played on the radio . i have heard it for the first time ! thanks
muhammad kamran on Friday, January 30, 2015
just close your eyes and enjoy the song. What a dard of rafi sahab's
voice.. Whenever you will visit Tajmahal. you will remember Rafi sahab..
Thanks for uploading this nice song., after 34 years of his death no one
can beat.

kvijay1949 on Monday, November 15, 2010
What a feel in Rafi saab's singing.every time when i heard this song,lot of time is required to come out from that world. my sincear thanks to the peron who has uploaded this song
vijay