Video of this song from youtube
Average Rating : 4.40
Total Vote(s) : 40
Please rate this song between 1 star and 5 stars (5 stars being the best). Just move your mouse on the stars above and click as per your rating. Your rating will really help us to improve our website. 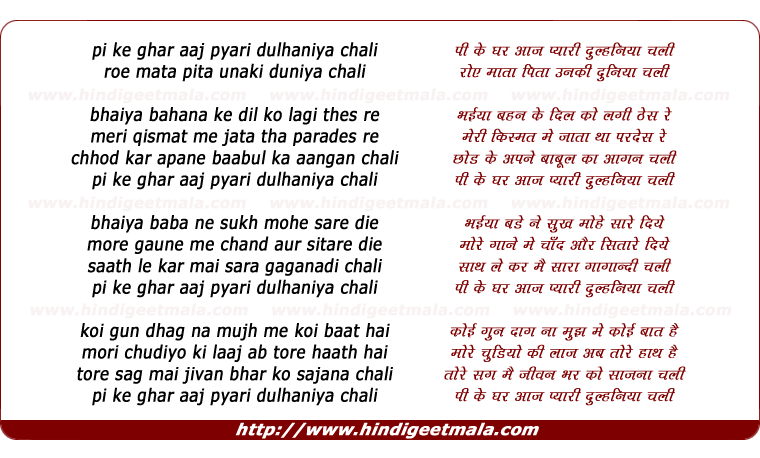 Comments on song "Pi Ke Ghar Aaj Pyaari Dulhaniya Chali"
TheNetRoamer on Thursday, February 18, 2010
A unique song in a unique movie, they have yet to produce one that is match
for Mother India. Gone are the days when such movies were made. Gone are
the days when pati was regarded as permashwer. :)

Sabyasachi Mishra on Friday, July 31, 2009
It was some of the first films in my life, when i started becoming a film
addict. A real like story. Both actors are very nice.. The heroine is
Nargis, and the male actor is raaj kumar, famous for his dialogues...

tolykozin on Tuesday, December 07, 2010
Naushad could not have chosen a better singer SHAMSHAD BEGUM for this song.
It remains by far her best number, capturing the very essence of separation
from daughter and her home to a new life with her husband.

Claudiaitaliansrkfan on Saturday, August 25, 2007
what beautiful film! It`s so sad, i cried a lot when i saw it but very
beautiful. I love the scene of the marriage, the 2 actors are so beautiful!