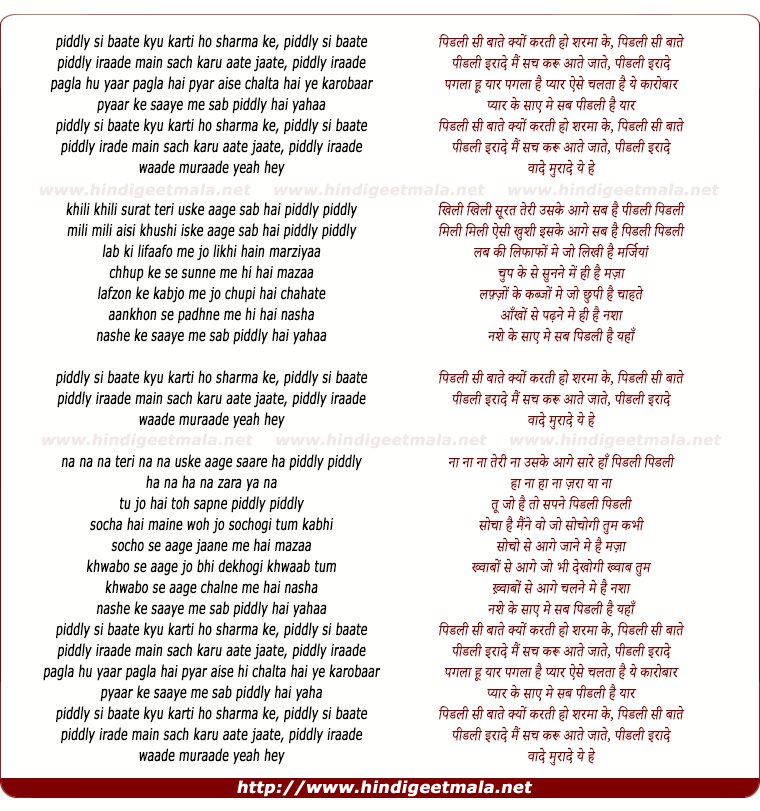 Comments on song "Piddly Si Baatein"
Gautam Ashok on Tuesday, January 20, 2015
Not too impressed by Illayaraja's music. He still seems to be stuck in the
80s. He had his time. But he hasn't adopted with it. There's a reason why
most people like ARR more that Raja: Rahman doesn't hesitate to experiment
with new genres or introduce new talent. He constantly updates himself.
Even in Tamil, who listen's to Raja's music (besides his old hits) anyways?
Don't know why Balki selected him. No offence Raja fans but he has remained
stuck in time. ﻿

Anurag Hoffmann on Friday, January 02, 2015
Big B is the biggest icon of indian cinema, he's able to play in every
genre and is still surprising us after such a long career. Respect sir !
This film is going to be another true piece of art by R.Balki, can't wait
to see Big B and Dhanush sharing screen together.﻿

Kumar Sivasithamparam on Thursday, January 01, 2015
One is a maestro. Only Indian composer to create symphony and a true genius
who don't rely on computers or synthesizers.
The other is a true icon of Indian cinema. I have nothing to say about Big
B.
This is going to be amazing movie with some superior casts.﻿

197sma on Saturday, January 10, 2015
Amitabh Sir and Ilayaraja are beyond words. His voice has not yet been
tapped fully by music directors in India. Com'on guys, sign AB as soon as
possible. He is phenomenal. WOW...He is one of us, not someone far out
there..﻿

Amazing Big B.. But wonder Y on a WC.. Guess, great ideas come in
bathrooms.. lol..
best song on Big B till now.. way to go. you have at least as counted that,
but i couldn't count how many times i m listening and humming!!!﻿