Video of this song from youtube
Average Rating : 4.40
Total Vote(s) : 340
Please rate this song between 1 star and 5 stars (5 stars being the best). Just move your mouse on the stars above and click as per your rating. Your rating will really help us to improve our website. 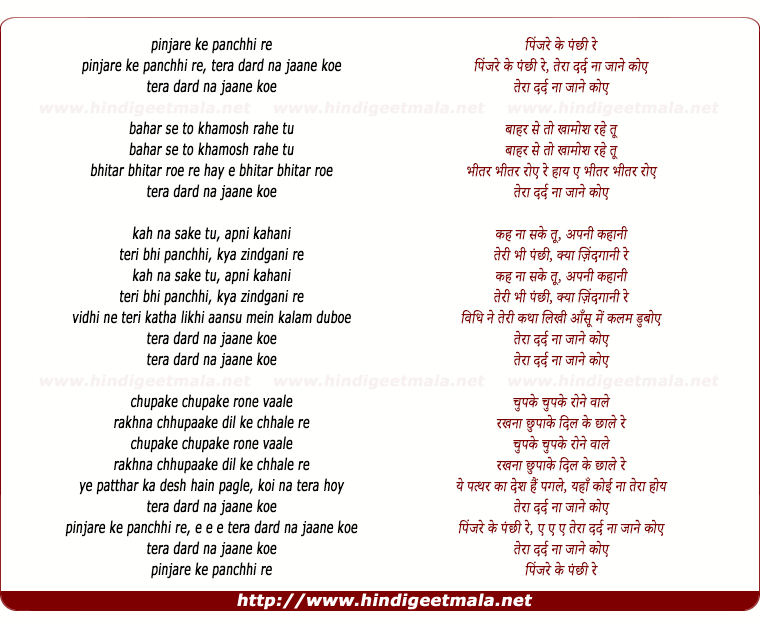 Comments on song "Pinjare Ke Panchhi Re Teraa Dard Na Jaane Koe"
RealMusicKing on Sunday, June 27, 2010
@THISSAMS4U . I agree. There are four famous traps since the beginning of time. First, fisherman's net. Fish will never learn not to get caught in it. Second, spiders web. Bugs will never learn to avoid them. Third, men will never learn NOT to get entrapped in womens trap. Finally, all Non-Brits around will never learn to NOT to get fooled by the British. So, why blame the Brits? :-)
preetysndy on Saturday, August 22, 2009
chpyare
When i was 7/8 use 2 sing this wen i 1 heard it on z radio til now , as if embedded in my whole body.I still sing most o them not very sweet & melodious like pradeep,the words 1 sweetness in his songs if only nwadays people would tke x 2 thnk.

Larry Supersad on Tuesday, April 28, 2009
We can share everything but this Karma can't be shared. We can't be paid or
punished for others Karma. Only the person himself is responsible for his
life. Due to this destiny, Lord Rama havego in exile (Forest). Even God is
bounded by this law of Karma ... Read more Don't be depressed , don't weep
Nothing is going to happen as per our wish. Read More Whatever is
destined is going to happen. Either you are King or a Begger , every one
will fall due to his Karma. Karma can't be changed

DILBER DUMASIA on Saturday, April 25, 2009
My friend Shabbir asked me to sing this song once during a singsong session
on a holiday trip. Sadly I knew only the opening lines. I wish I had known
all the beautiful words of this rather moving song. Here's wishing my
friend Shabbir every happiness in his corner of the world.