Video of this song from youtube
Average Rating : 4.06
Total Vote(s) : 36
Please rate this song between 1 star and 5 stars (5 stars being the best). Just move your mouse on the stars above and click as per your rating. Your rating will really help us to improve our website. 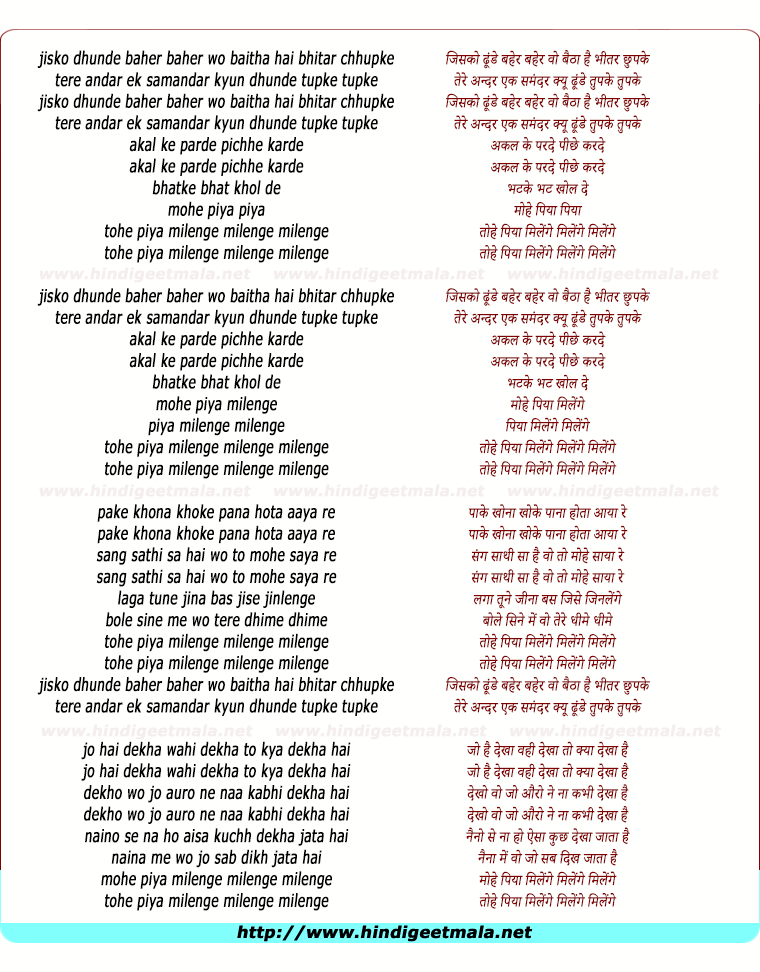 Comments on song "Piyaa Milenge Milenge"
Great Guru on Thursday, June 13, 2013
I see u have watched and commented on so many Kamal videos, so I cant argue
with u :), But trust me Dhanush is a pure class act, with his poor looks,
when everybody making fun of his looks, in his second movie 'Kadhal
Kondaen; itself he gave answers to all his critics.. I would say Dhanush is
even better than Kamal, because Kamal did not have the ordinary looks, he
was a darling of the mass from the begining stage, Kamal is a genius, only
Vikram and Dhanush can give such performances after Kamal

Durgesh Kumar on Saturday, June 15, 2013
Dk Bharti
He looks like a labour and is acting like a labour. So no problem. But if u take Salman, looks like katrina's father but acts as her lover. Think. Make Indian muvees bettr
Reply Â·

He looks like a labour and is acting like a labour. So no problem. But if u take Salman, looks like katrina's father but acts as her lover. Think. Make Indian muvees bettr
Reply Â·

princeGYfan on Thursday, June 13, 2013
The emotions of the characters are so real...I love this song.♥♥..both
dhanush and sonam are doing an amazing job in this movie♡♥...talent is more
appealing to me than anything else... I never see regular bollywood movies
but I am waiting to see this on the day of release...:) june 21st !!!! 1
week..yay...☆★

Great Guru on Thursday, June 13, 2013
She looks awesome, both Dhanush and Sonam has given very good feel and act
on this song.. Even if she ugly, according to you, it doesnt change the
fact that first time she has given a pretty good performance, both of them
will be celebrated after the film release..

Megha Raizada Das on Sunday, June 23, 2013
i agree many ppl over here on the point tht only good isnt the criteria for
being actor... dhanush has rocked in movie.a true
natural... and for kind information i'm not a south
indian.i m a bengali