Average Rating : 4.42
Total Vote(s) : 55
Please rate this song between 1 star and 5 stars (5 stars being the best). Just move your mouse on the stars above and click as per your rating. Your rating will really help us to improve our website. 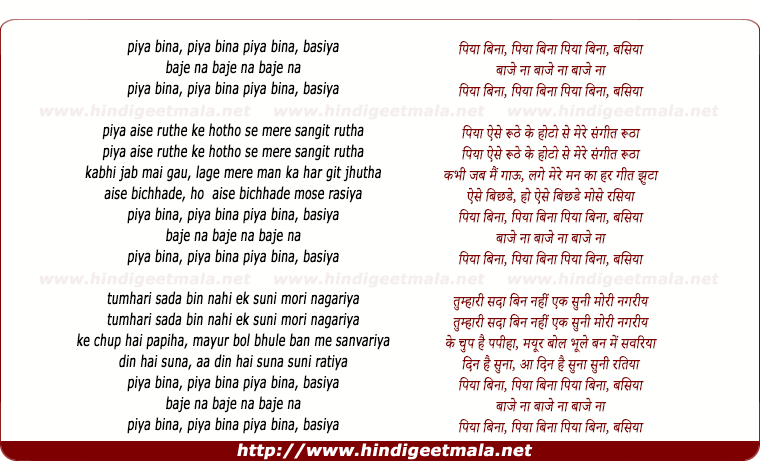 Comments on song "Piya Bina Piya Bina, Baasiya"
033789 on Saturday, May 30, 2009
The one & only Jaya Bhaduri ! ! What can I say ! ! She is so awesome ! ! Absolutely Brilliant ! ! She becomes the heart & soul of this film. She may not be the most glamorous woman in the world but there is something special about her...like some kind of 'silent beauty'. She is so talented yet so simple...like a 'girl next door' and she is very very likeable. The one you want to be with all the time and already start missing her even before she leaves the room. May God bless her ! ! Thank you.
harrisjeyaraj on Saturday, April 16, 2011
I remember the days, when I was in mid twenties, early in the morning, in
the midst of running to work, I played this song in the background from my
tapes. It brought peace, calmness and inner coolness whenever I heard the
song. And trust me, even now, I don't understand single word of this song,
as I am from south. But what a composition. Though I am a very big fan of
Ilaiyaraja the legend, you got to appreciate great compositions like this
one. What a musical piece!

Mulakush on Thursday, April 09, 2009
It is said that beautiful women are invisible. How true in this case! We
never seem to get past their outer beauty to interact with the true persons
inside who eventually gets sad and lost. We do not know how to educate our
men to be sensitive and decent towards women. Some thing even happens to
women who have sons and they raise them to be arrogant and uncouth. Why can
they not remember their own pain? Why do they, in general, become
'Monster-in-laws'?

jalashree on Wednesday, June 03, 2009
Jaya Bhaduri Bachchan------My most most favourite actress. Nobody can take
her place. She was different, in all parts and different from all her
glamarouscounter parts. I just adore her, someone so simple, never ever
wearing cheap clothes, extremely talented. I miss her.I respect her as a
home maker. Look at Abhishek & Shweta, so much cultured & all credits goes
to her.

ramaraksha01 on Sunday, June 30, 2013
She is good but i think he is the better actor and of course in any field
men have the advantage. He became a bit of a ham in the later years, well,
he lost the hunger that he had in the early days, can't blame him for that
- but many think he is India's greatest actor, and i think they are right
Jaya is not - my grading would be 1. Nutan 2. Waheeda - then maybe Jaya