Video of this song from youtube
Average Rating : 4.47
Total Vote(s) : 47
Please rate this song between 1 star and 5 stars (5 stars being the best). Just move your mouse on the stars above and click as per your rating. Your rating will really help us to improve our website. 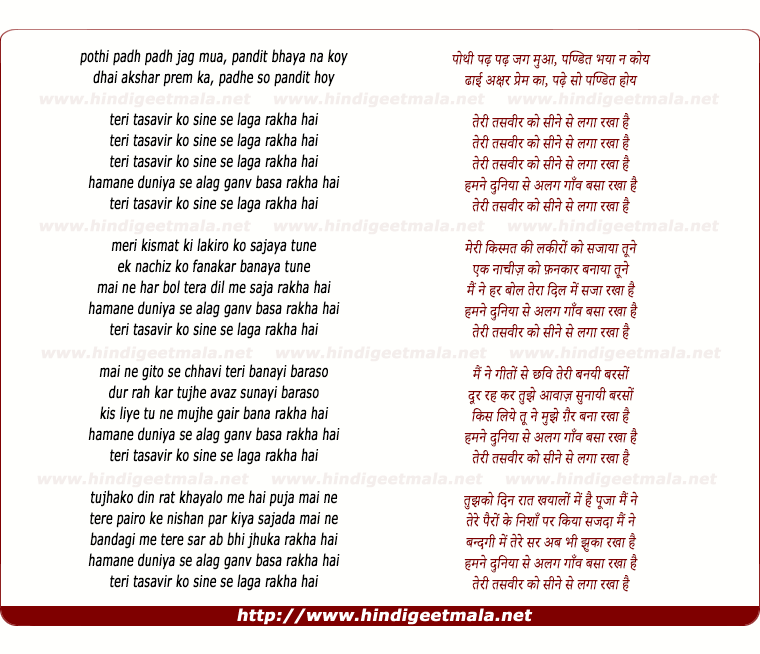 Comments on song "Pothi Padh Padh, Teri Tasavir Ko Sine Se Lagaa Rakhaa Hai"
Saurabh Aatrey on Sunday, December 26, 2010
@sonunambi This is the only problem with all bhartiya(indians) why u guys
compare these all legends while all r the best in his style of singing. I
also love yasudaas voice but if u say his voice is better then manna dey,
hemant, rafi, kishore.that's not fair. yasudas has own quality of voice
no doubt but dont try to make difference north vs. south we are one & we
count yasudas in same class in which we count manna dey, rafi, kishore
hemant etc. & also suresh vadekar is in same class.

Imrankniazi on Tuesday, September 15, 2009
Yesudas is a great singer, brother. As you know well, I am also a fan of
his style of singing. But let's not open the Pandora's box by rating/
ranking Allah-given talent. They are all exceptional -- Rafi, Yesudas,
Kishore, SPB, Lataji, Mukesh -- all of them. And yeah, nawabshaukat sa'ab,
no one is laughing here. We are all held spellbound by one of the finest
human voices. Peace and harmony, Imran

knpradeep77 on Sunday, January 04, 2009
i am sure rafi or Kishore could not have sung better than this, if they
were to sing this song. may be mannady could have. undoubtedly, Yesudas is
the best in Indian Film SOngs

knpradeep77 on Tuesday, September 15, 2009
there is a better medicine, they should be forced to listen their own
songs. they will either kill themselves or stop singing next day