Average Rating : 4.10
Total Vote(s) : 88
Please rate this song between 1 star and 5 stars (5 stars being the best). Just move your mouse on the stars above and click as per your rating. Your rating will really help us to improve our website. 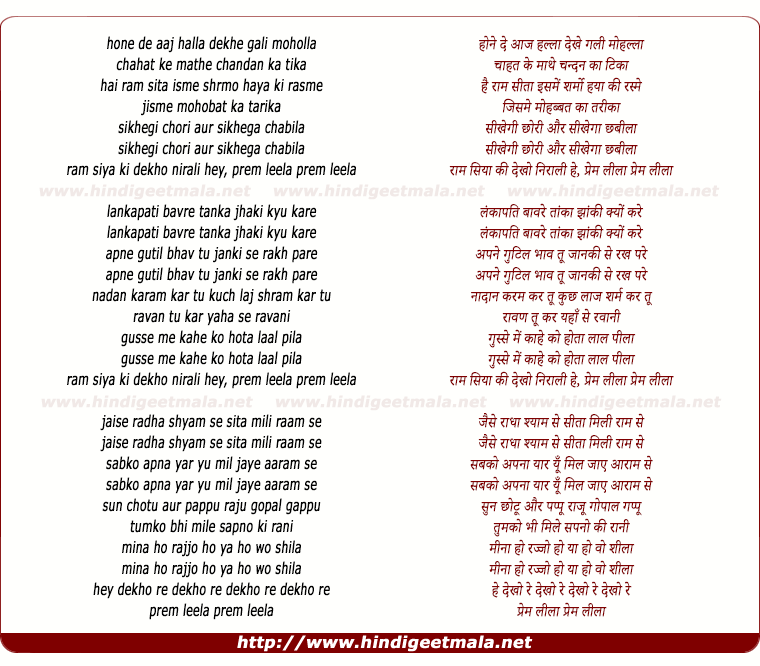 Comments on song "Prem Leela"
Malay Samant on Thursday, October 08, 2015
In the first hearing I felt the song to be an average song, but after 2-3
hearings it felt better and also realized that the song was a situational
one, but after listening to the full song it has won my heart, I am in
totally love with the song, Great work HR, superb singing Aman Trikha
More than 90% Likes on youtube of just the 1:58 song is a testimony that
it's already a HIT, Jumme Ki Raat and Selfie Le Le still have 87% Likes
only﻿

Manish Kumar on Wednesday, October 07, 2015
there may be actors more talented than him but when it comes to
ENTERTAINMENT, SALMAN is class apart. Nobody can entertain masses better
than him. There is something special about this guy which attracts the
masses and family audience.﻿

PANTY002 on Wednesday, October 07, 2015
The song by Palak Mucchal in the trailer was so melodious but this song is
a total let down. God knows which local singer has sung it. Now m relying
on Kumar Sanu and Sonu Nigam to save the music. Eagerly waiting for other
songs﻿

Malay Samant on Friday, October 09, 2015
Challenge for all the listeners, listen to the song 3 times consecutively
and try not getting addicted to it. This is a masterclass from Himesh
Reshammiya and Aman Trikha as a singer sounds amazing in the song﻿