Video of this song from youtube
Average Rating : 3.75
Total Vote(s) : 16
Please rate this song between 1 star and 5 stars (5 stars being the best). Just move your mouse on the stars above and click as per your rating. Your rating will really help us to improve our website. 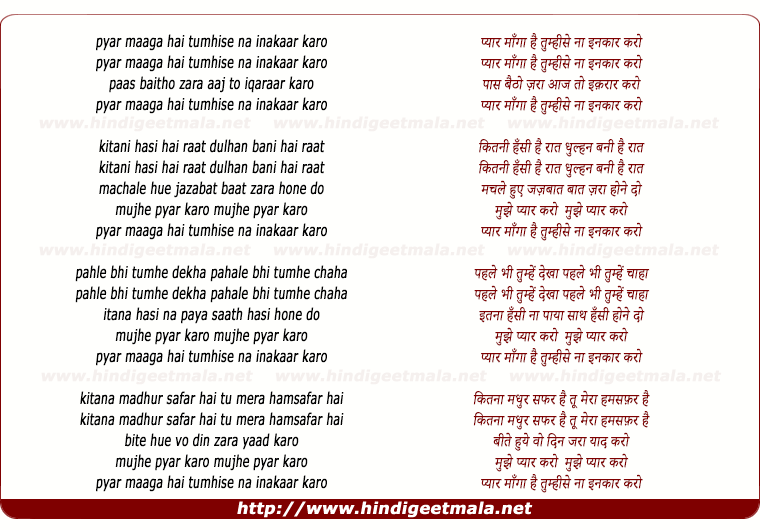 Comments on song "Pyaar Maangaa Hai Tumhin Se Na Inakaar Karo"
28Dharm on Wednesday, August 04, 2010
Kishoreda would have been 81 2day...remembering him with his golden songs...He was a versatile personality, a director, actor, writer and musician, but his singing alone was enough to immortalise him. His voice was unparalleled, evergreen and unforgettable. His uniqueness was the lilting humming at the start of his songs, like Pyaar Manga hai tumhi se, Yeh jo Mohabbat Hai, Yeh shham mastani, Chingari koi bhadke, Chookar mere mann ko, meet na mila re mann ka, O mere dil ke chain, pag ghunghroo.
Pashon8man on Friday, May 29, 2009
Late 70 was the period when Disco music was not popular and Bhappi Lahri
spent more of his time for making meaningful music tunes compositions. This
song is a great example of great music of Bhappi Lahri and great soulful
voice of Kishore Kumar for film, "College Girl". Thank you so much Kanwal
bro for sharing it and thanks to you as well Mr. YS Chary for uploading
this song in tasteful audio.

SMohinder on Friday, February 12, 2010
all songs kishor, rafi and manna day sang together, for yr surprise kishore
stands out...people underestimated kishore for long but R D Burman who
brought the best out of kishore and he shocked music world many times with
his talent...there r song kishor ca'nt sing like rafi sahib but there r
songs no one could justice except kishore da.they r two parrallel
lines..coprando?

iamyourfriend007 on Wednesday, December 05, 2012
There is no comparison between kumar sanu and kishore da. Kishore was
legend whereas kumar sanu was only imitating him. Even though kumar sanu
immitate or take inspirations from kishore, he never had the caliber
/potential of kishore da. Maybe u nave never noticed that all the songs of
kumar sanu are the same. He sung the same type of songs in his entire
career.

russel ahmed on Sunday, April 19, 2009
I love this song very much ..no doubt its excellent...and kishore has
done agreat job.but Rafi was a better singer...lara may have made
400..and tendulkar countless hundreds ..but VIV remains the
king...some are just timeless...I am not demeaning
anyone.