Average Rating : 4.33
Total Vote(s) : 72
Please rate this song between 1 star and 5 stars (5 stars being the best). Just move your mouse on the stars above and click as per your rating. Your rating will really help us to improve our website. 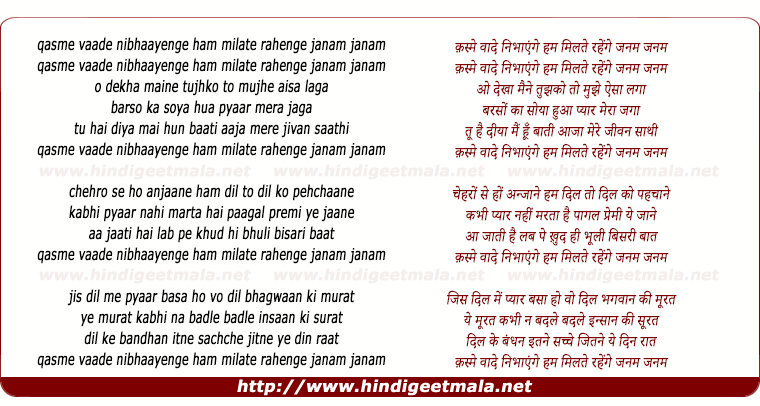 Comments on song "Qasme Vaade Nibhaaenge Ham"
gbolagun on Tuesday, November 11, 2008
great song, great rhythm, lovely music. one of the best of all time. great to see the great man himself, Amitabh and the beauty queen Rakhee. cheers for posting.
Shobha Nivas on Tuesday, December 24, 2013
Oh What beautifull songs all those Lgends have made for us to live in
Bliss when this world is full of confusion ... able to compromise to
live coz of KK and Latajis songs... specially Amitabh with red shirt is
handsome.and Rakhee the pettite .﻿

syed tariq ahmed shah on Friday, July 06, 2012
what a beautiful romentic song. i wish i would be in that era. love doesnt need yo be achive it is juxt a feeling which moves like wind..
mohsinaliization on Tuesday, October 05, 2010
this is magic. in old times, these songs bewitched us and now the indian are only dirt. this is the logical consequence of film industries.
View all 78 comments related to song Qasme Vaade Nibhaaenge Ham