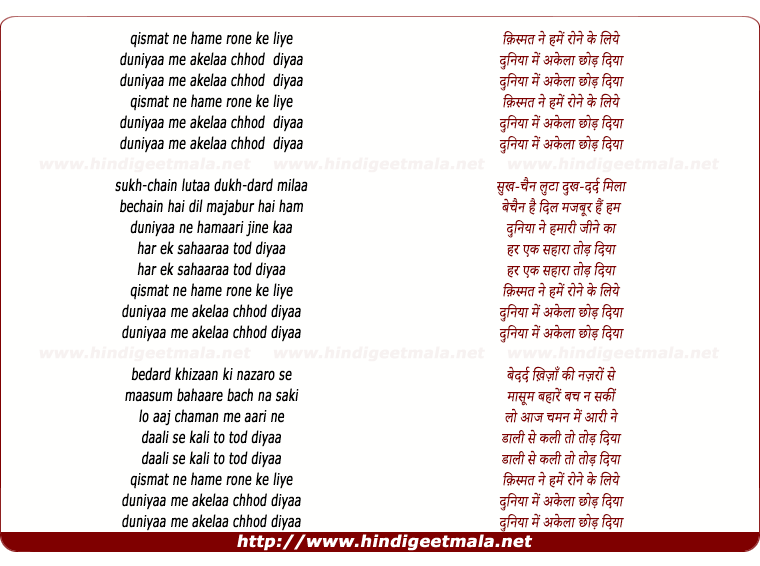 Comments on song "Qismat Ne Hamen Rone Ke Liye"
Moid Hasan on Sunday, August 28, 2011
What a song presented by you Rehma ,We were waiting for this upload for a
long time ,Suraiya's doleful singing giving due respect to the lyrical
wordings of Asad Bhopali,brought laurel in the cap this duo ,when Moti
Mahal 1952,was released,composed by Hansraj Behl,Directed by Ravinder
Dave,Rehma you deserve a very very special thanks and appreciation for
uploading this song on this special Eid occasion,

Vidur Sury on Monday, August 29, 2011
Congrats Rehma Ji! Gorgeous Suraiya Ji song from Moti Mahal (1952). Ye
pehle mere request list mein tha but I got it soon after. Thanks a lot for
uploading this favourite of mine. Suraiya Ji is incomparable and
unbeatable. Hansraj Behl Ji has composed some of her finest and most
versatile and challenging songs. You've proved that with another golden
upload.

jasbongy on Sunday, August 28, 2011
@rehmaather When Suraiya Ji came out from the building to go out in her
car, police force used to come near her house to control the traffic as
every one stopped the car to watch this graceful, beautiful Star. She lived
two buildings distance from our house.& Nargis Ji lived next to Suraiya
Ji's building.

saz9297 on Monday, August 29, 2011
Suraiya and Shamshad are my most favourite female singers. suraiya on
screen looks very innocent lady. sad she spent hard life. almoost all songs
from Moti mahal were very heart adorning. her voice always capitivated to
the listeners Thanks for uploading this beautiful song

jasbongy on Saturday, July 13, 2013
Thanks Dear LATA. Dear REHMA Ji.has excellent fine taste like you for
beautiful melodies.I don't know why she no longer uploads such gems . Bless
you.Love Didi.